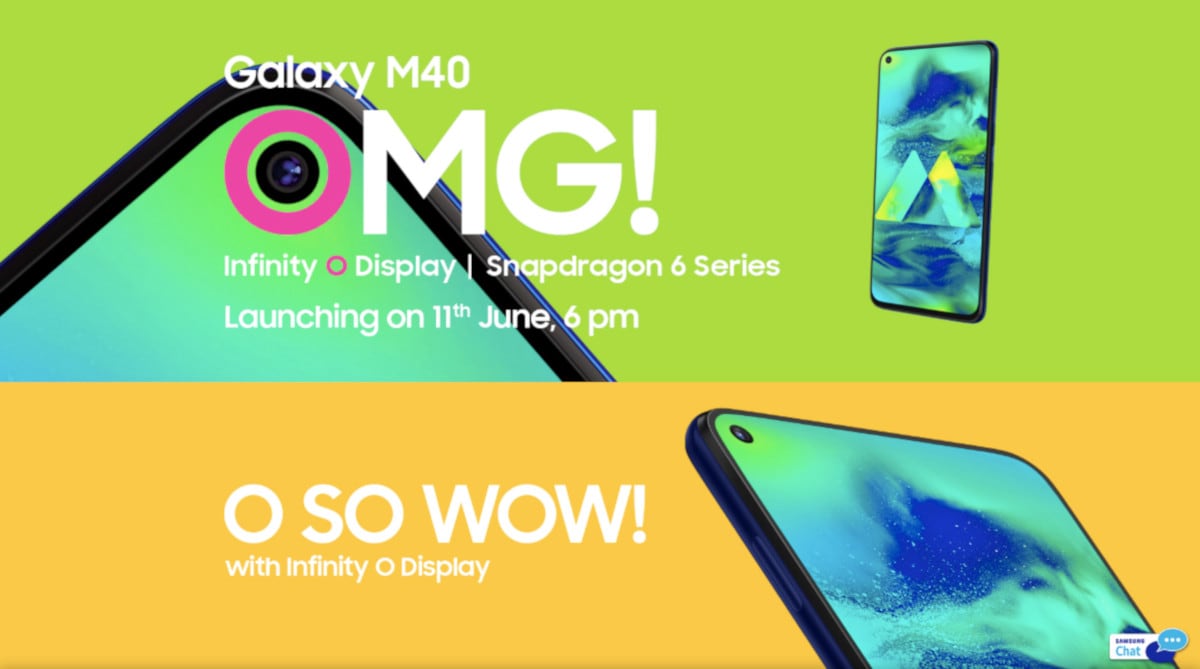 Samsung Galaxy M40 is set to launch in India at around Rs. 20,000 price point, a senior company executive revealed on Wednesday. The new phone in the Galaxy M series that debuted in the country earlier this year is touted to offer a range of attractive specifications and features. Among the highlights, the South Korean company has decided to provide the octa-core Snapdragon 675 SoC on the Galaxy M40. The Qualcomm chipset has already been praised for compelling performance on models such as the Redmi Note 7 Pro. Recently, the company teased the Galaxy M40 through its social media channels and revealed its release date as June 11.

The price point quoted by Warsi is substantially lower than what was earlier reported by news agency IANS. Also, it is significant to note that the Rs. 20,000 price bracket already includes some quite popular handsets, including the top-end variants of the Realme 3 Pro and Redmi Note 7 Pro as well as Nokia 7.1 and Poco F1.

Samsung in a recent teaser through its social media channels revealed that the Galaxy M40 launch is scheduled in India for June 11. The phone is also teased to sport an Infinity-O Display panel, which is commonly known as a hole-punch camera design.

Warsi while talking with Gadgets 360 mentioned that apart from the Infinity-O Display, the Galaxy M40 will flaunt a triple rear camera setup along with a 32-megapixel primary sensor. The smartphone is also Samsung's first model to have a "Screen Sound" technology.

"There is no earpiece," the executive highlighted. "So the audio vibrations come directly from the display. It's a very new and a different experience altogether."

While smartphones such as the Galaxy S10 series and Galaxy A60 arrived this year with an Infinity-O Display, the Galaxy M40 is the first to carry the company's Screen Sound technology. This was originally called the Sound on Display (SoD) technology and showcased by the Seoul-based company at the Display Week back in May last year.

Samsung is expected to start selling the Galaxy M40 through Amazon.in and the Samsung Online Store shortly after its launch next month -- just like the existing Galaxy M-series phones.

To recall, the Galaxy M series started its journey in India first with the arrival of the Galaxy M10 and Galaxy M20 in late January. The handsets went on sale in February. Moreover, the company in March expanded the range by introducing the Galaxy M30, which was the top-end model in the line-up until now.