Samsung Galaxy M32 launch will take place at 12pm (noon), and ahead of that unveiling, the smartphone's price as well as specifications were tipped. 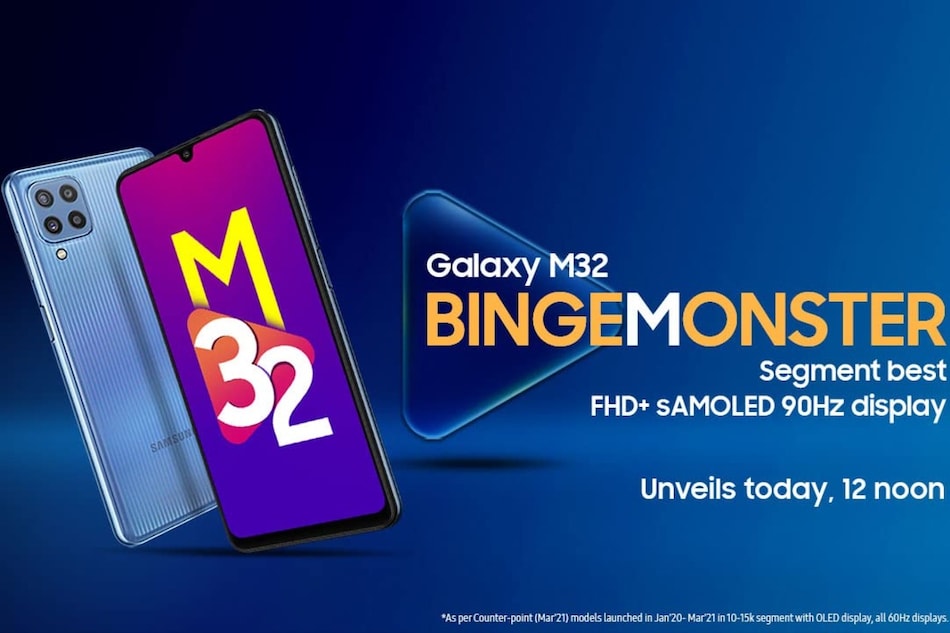 Samsung Galaxy M32 launch in India is set for today (Monday, June 21). The new Samsung phone will debut as the successor to the Galaxy M31 that was launched in February last year. Ahead of the official announcement, Samsung Galaxy M32 specifications have been tipped online. Amazon has also listed the smartphone with some details about its hardware. The Samsung Galaxy M32 has notably been a part of the rumour mill for the last couple of months and surfaced on sites including Geekbench and Bluetooth SIG.

The Samsung Galaxy M32 launch will take place at 12pm (noon). Shortly after the official launch, the smartphone would be available for purchase through Amazon, Samsung India online store, and other retail channels, as suggested by listings on Amazon and Samsung.com.

Samsung Galaxy M32 price in India will start at under Rs. 15,000, the South Korean company confirmed while announcing the phone's launch date last week. However, exact details about the pricing of the Galaxy M32 have not been revealed officially, ahead of the launch event.

Samsung Galaxy M32 specifications have been tipped by a tipster @heyitsyogesh on Twitter. The smartphone is said to have a 6.4-inch full-HD+ Super AMOLED display with a 90Hz refresh rate and Gorilla Glass . It is also tipped to have an octa-core MediaTek Helio G85 SoC, along with up to 6GB of LPDDR4X RAM. The tipster has also claimed that the phone could come with up to 128GB of eMMC 5.1 storage.

In terms of optics, the Samsung Galaxy M32 is said to have a quad rear camera setup, with a 64-megapixel primary Samsung ISOCELL GW3 sensor, along with an 8-megapixel secondary sensor and two 2-megapixel sensors. The phone is also tipped to have a 20-megapixel selfie camera sensor.

The Samsung Galaxy M32 is said to have a 6,000mAh battery with 15W fast charging support (bundled charger would be in the box).

If we look at past reports, the Samsung Galaxy M32 may come in two distinct configurations — 4GB + 64GB and 6GB + 128GB. The phone is also said to have Black and Blue colour options. Furthermore, it appeared on certification sites including the one of the Bureau of Indian Standards (BIS) with a model number SM-M325F/DS.