Samsung Galaxy M31 is tipped be priced at around Rs. 15,000. The phone is expected to come in Blue, Black, and Red colour options. 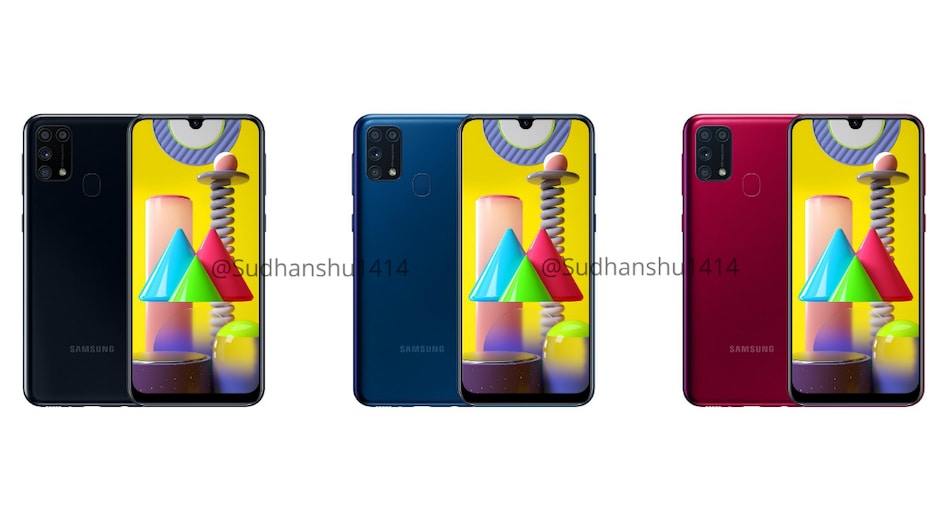 Samsung Galaxy M31 is set to launch next week in India

Samsung Galaxy M31 is all set to launch on February 25 in India. The phone is being teased on Amazon India already, and the e-commerce site has revealed a few specifications. A fresh leak now claims to offer all details about the phone – its full specifications, design, colour options, and even the price. The Samsung Galaxy M31 has shown up in multiple alleged renders that claim to offer a look at the phone. The phone is seen to sport an L-shaped quad camera setup at the back, rear fingerprint scanner, and waterdrop-shaped display notch.

According to a tweet by tipster Sudhanshu Ambhore, the Samsung Galaxy M31 will be priced at around Rs. 15,000. This is close to the Rs. 15,999 price reported earlier. Ambhore has also shared alleged renders of the phone in three colour options – Blue, Black, and Red – hinting at probable colour options and revealing design details. Apart from the quad camera setup and the waterdrop notch, there's a slight chin seen at the bottom of the display and the physical volume and power buttons are placed on the right edge of the phone.

The tipster claims Samsung Galaxy M31 will come with dual-SIM support and feature a 6.4-inch (1,080x2,340 pixels) Super AMOLED Infinity-U display. It is expected to be powered by the Exynos 9611 SoC and pack 6GB RAM. Additionally, the phone is said to come with 128GB of onboard storage with the option to expand it further using a microSD card (up to 512GB).

Samsung Galaxy M31 to Launch in India Next Week: Price, Specifications, and Everything We Know So Far