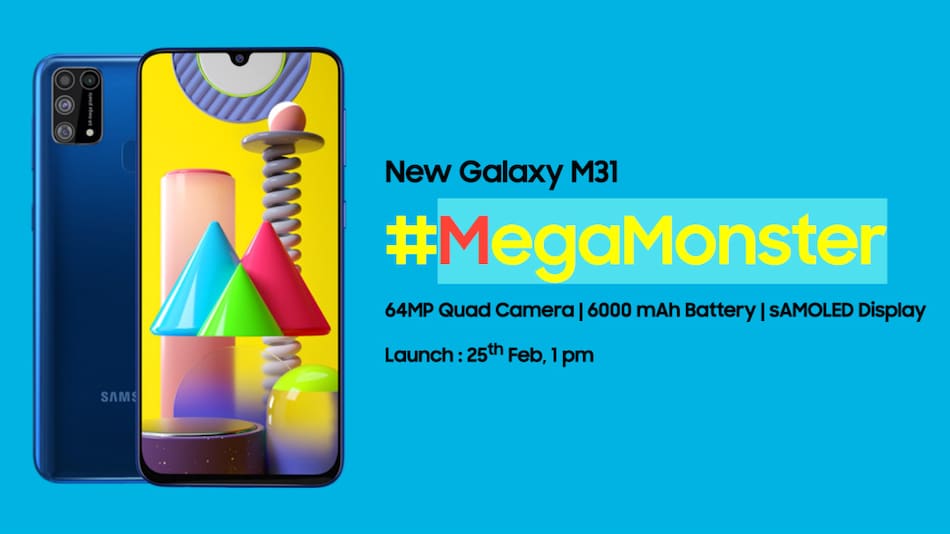 Samsung Galaxy M31 is all set to be launched in India today at 1pm. The new Samsung phone will succeed the company's Galaxy M30 and Galaxy M30s phones in the country. The South Korean tech giant has revealed three major reasons to buy this smartphone, which includes a Super AMOLED display, a 6,000mAh battery, and a 64-megapixel quad camera setup at the back. Additionally, apart from being offered from Samsung's official website, the Galaxy M31 is also being teased as an Amazon India exclusive.

The launch live stream for the Samsung Galaxy M31 starts today at 1pm IST. It will be live streamed on the official Samsung India YouTube channel. We will be providing live updates from the launch right here.

The Samsung Galaxy M31 is expected to sport a 6.4-inch full-HD+ (1,080x2,340 pixels) Infinity-U Super AMOLED display at the front. It is likely to be powered by the Exynos 9611 SoC, coupled with 6GB RAM and either 64GB or 128GB of onboard storage. Additionally, you will also be able to expand the storage via a dedicated microSD card by up to 512GB.

By looking at the teasers of the Galaxy M31, it is confirmed that the phone will be packing a 6,000mAh battery under the hood with support for 15W fast charging. Moreover, the device is tipped to measure at 159.2x75.1x8.9mm and weighs about 191 grams. The phone is expected to come in Blue and Black colour options.