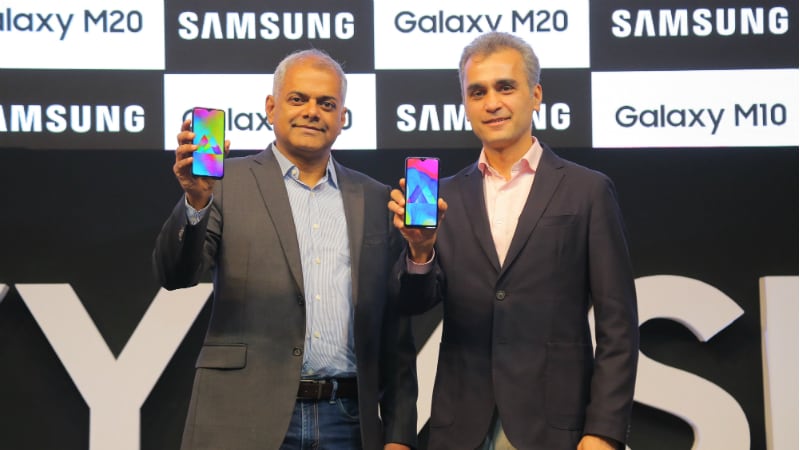 Samsung Galaxy M20 and Galaxy 10, phones part of new Samsung M series of smartphones, were officially launched in India on Monday. The new Galaxy M phones are being marketed as "India-first" smartphones and targeted to the millennials. The Galaxy M20 and Galaxy M10 both have Infinity-V Display panels as well as dual rear camera setups. The smartphones also come with a face unlock feature and pack up to 5,000mAh battery. The company hasn't provided its One UI based on Android Pie on the new models. However, there is a new custom skin powered by Android 8.1 Oreo on the Samsung M series of phones. There will also be Widevine L1 support to enable HD video streaming through apps such as Amazon Prime Video and Netflix. The Galaxy M20 and Galaxy M10 also come as an online-exclusive models with their sale scheduled for February 5 via Amazon.in and Samsung India e-Store.

Both Samsung Galaxy M-series models will go on sale through Amazon.in and Samsung India e-Store starting February 5. The new phones will come in Charcoal Black and Ocean Blue colour options.

As an introductory offer, Jio 4G customers buying the Galaxy M-series models are entitled to receive "Double-Data" on Rs. 198 and Rs. 299 recharge packs.

For images and videos, there is a dual rear camera setup along with a 13-megapixel primary sensor -- sporting an f/1.9 aperture and a 5-megapixel ultra-wide sensor. An 8-megapixel sensor along with an f/2.0 aperture is available at the front.

The Galaxy M20 has 32GB and 64GB of onboard storage options, both of which are expandable via microSD card (up to 512GB). There is a fingerprint sensor at the back, and the phone also comes with a face unlock feature. Besides, the smartphone packs a 5,000mAh battery that supports fast charging via USB Type-C.

Samsung has provided a dual rear camera setup on the Galaxy M10 that includes a 13-megapixel primary sensor along with an f/1.9 aperture and a 5-megapixel secondary, ultra-wide sensor. For selfies, there is a 5-megapixel sensor at the front. The smartphone has an ultra-wide mode to support landscapes, cityscapes, and group photos.

The Samsung Galaxy M10 has 16GB and 32GB of internal storage options, both of which are expandable via microSD card (up to 512GB). The smartphone also comes with a Micro-USB port. Furthermore, the handset packs a 3,400mAh battery.