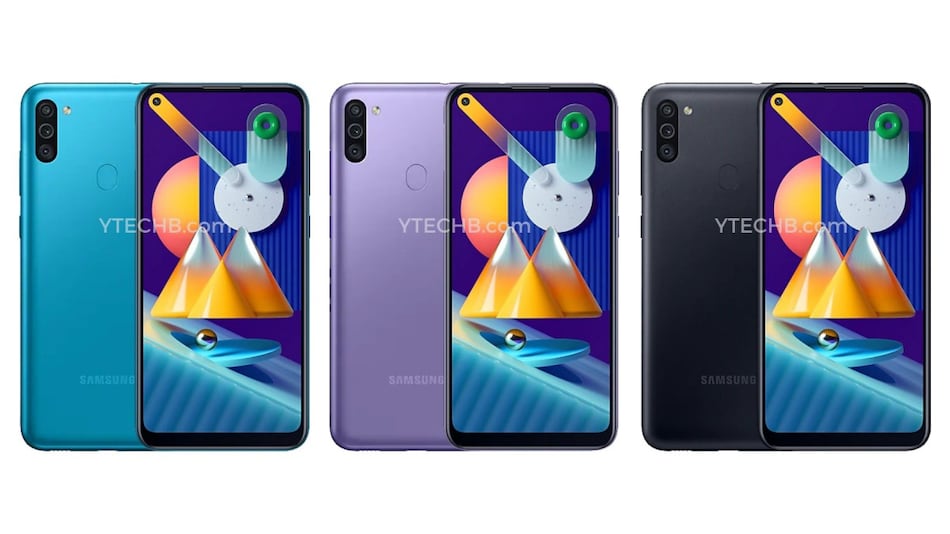 We have been hearing about Samsung Galaxy M11 for over three months now and while the smartphone is yet to an official debut, perhaps because of the coronavirus outbreak, a new leak has surfaced online, claiming to bring us another look at this upcoming Samsung smartphone. The leak includes various official-looking renders of the Galaxy M11 as well as the alleged specifications of the phone. To recall, Samsung Galaxy M11 was last reportedly spotted in the database of a Taiwanese regulator and the listing tipped the presence of 5,000mAh battery in the phone.

The latest set of Samsung Galaxy M11 alleged renders and specifications were published online by a blog called ytechb.com. The leaked renders seem to be in line with what we have seen in the past, including the purported Google Play Console listing that included a photo of the Galaxy M11. The ytechb.com report claims that the Galaxy M11 will be offered in Black, Purple, and Sky Blue colour options, however not all markets will get all colour variants.

According to the report, Samsung Galaxy M11 display with a hole-punch design. The same resolution was also spotted in the leaked Google Play Console listing. Additionally, the phone is said to come with a rear fingerprint sensor and the same can be seen in the leaked press render.

Further, the phone is reportedly going to include a triple rear camera setup that will house a 13-megapixel main camera, a 5-megapixel ultra-wide-angle shooter, and a 2-megapixel depth sensor. The front shooter is said to be an 8-megapixel camera.

In other specifications, the phone is believed to be powered by Qualcomm Snapdragon 450 SoC. The previously leaked Google Play Console listing tipped the presence of Adreno 506 GPU, which is currently paired with four of Qualcomm's chips, and three of them are older 600-series processors. We are unlikely to see any of those older 600-series chips in Galaxy M11.

In terms of the memory and storage, 3GB and 4GB RAM options, and 32GB and 64GB onboard storage options have been tipped. There will also be a microSD card slot for storage expansion, and it will be support cards with up to 512GB capacity.