Samsung Galaxy M11 made its debut in March. It packs a triple rear camera setup with a 13-megapixel primary sensor. 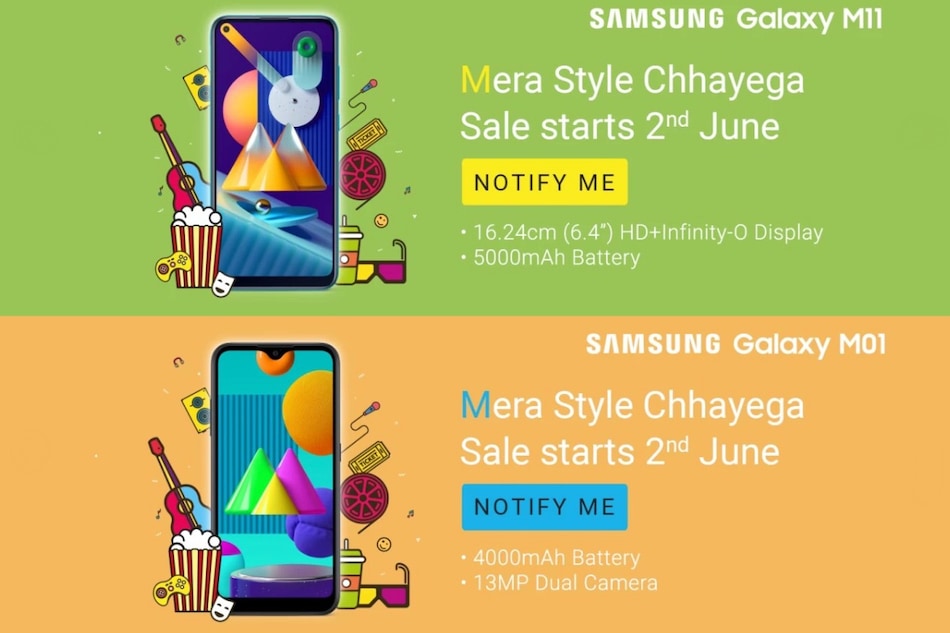 Samsung Galaxy M11 and Galaxy M01 will launch in India today at 12pm (noon). The Samsung Galaxy M11 is the follow-up to last year's Galaxy M10 smartphone, whereas Galaxy M01 seems like a new budget phone. Notably, the Samsung Galaxy M11 was originally unveiled at the end of March in UAE. The Galaxy M01, however, is a new entry-level phone by the South Korean company and not a lot is known about this new upcoming phone, except for its design and some specifications. Both the phones will go on sale today itself via Flipkart and offline retailers.

From the UAE launch of the Galaxy M11, the specifications of the phone are already known. The dual-SIM (Nano) Samsung Galaxy M11 features a 6.4-inch HD+ (720x1,560 pixels) display. It is powered by an octa-core SoC, paired with up to 4GB of RAM. For optics, the Galaxy M11 comes with a triple rear camera setup that includes a 13-megapixel primary sensor with an f/1.8 lens, a 2-megapixel depth sensor with an f/2.4 lens, and a 5-megapixel wide-angle shooter that has a field-of-view (FoV) of 115 degrees and f/2.2 aperture. For selfies, there is an 8-megapixel sensor with an f/2.0 lens, housed in a hole-punch located at the top left corner of the screen.

While not a lot is known about the Galaxy M01, the teaser page on Flipkart shows the phone will come with a dual rear camera setup that will include a 13-megapixel primary sensor. The selfie camera is housed in the notch and the phone will be backed by a 4,000mAh battery. The Galaxy M01 is also expected to come with a 5.7-inch HD+ (720x1,560 pixels) display. It may be powered by the octa-core Qualcomm Snapdragon 439 SoC, paired with 3GB of RAM and 32GB of onboard storage.