Samsung Galaxy M02 will come with a 5,000mAh battery, Amazon has revealed through a dedicated landing page. 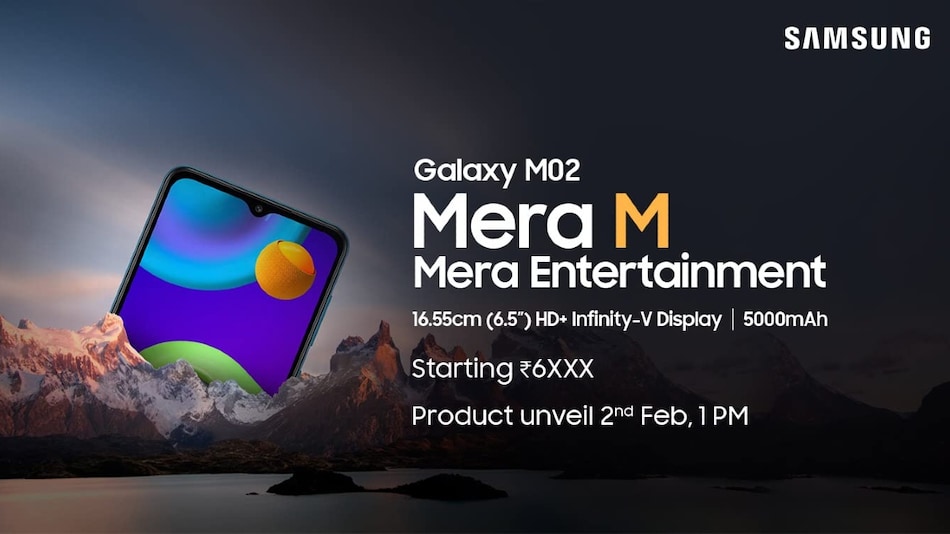 Samsung Galaxy M02 is launching in India on February 2, Amazon revealed on its website. The new Samsung phone, which will come as the successor to the Galaxy M01 that debuted in June last year, is expected to be the company's next-generation affordable model in the Galaxy M series. Alongside revealing the launch date of the Samsung Galaxy M02, Amazon has provided details about its specifications and price. The Samsung Galaxy M02 has been a part of the rumour mill for quite some time.

Amazon has created a dedicated landing page for the Samsung Galaxy M02 that highlights its India launch set for February 2 at 1pm. The launch is expected to take place through a livestream.

The Samsung Galaxy M02 price in India will be under Rs. 7,000, the landing page revealed. To give some perspective, the Samsung Galaxy M01 was launched in the country at Rs. 8,999 for the single 3GB RAM + 32GB storage option. The model received its latest price cut in December and is currently selling at Rs. 7,499.

Apart from the pricing details, the Amazon page shows that the Samsung Galaxy M02 will come with a 6.5-inch HD+ Infinity-V Display and pack a 5,000mAh battery. The phone is expected to be rebranded Galaxy A02s that was launched in Europe in November in 3GB + 32GB and 6GB + 128GB variants.

The rumour mill has suggested that the Samsung Galaxy M02 could come with a Qualcomm Snapdragon 450 SoC, with 3GB of RAM and 32GB of onboard storage. The phone is also speculated to have dual rear cameras with a 13-megapixel primary sensor. It is expected to get a 5-megapixel selfie camera sensor and a USB Type-C port.