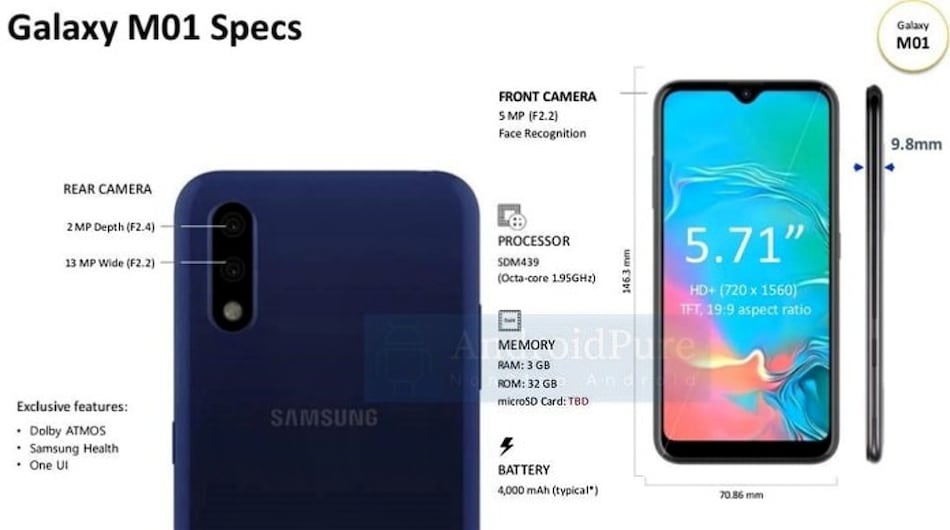 The tipster notes that these prices are for the offline market that could mean that the online market prices may be different. This leaked price of the Galaxy M01 falls in line with an earlier leak that suggested the phone to be priced under Rs. 10,000.

A separate schematic leak of the Galaxy M01 by Android Pure shows off its design and tips key specifications as well. The image suggests that the Galaxy M01 will come with a dual camera setup aligned vertically and positioned on the top left corner of the back panel. The phone does not seem to have a rear fingerprint sensor, nor is there any dent on the side to indicate a side-mounted one. The Samsung Galaxy M01 is seen with a waterdrop-style notch up front, and a considerably large chin at the bottom of the phone.

The leak also indicates key specifications details like a 5.7-inch HD+ (720x1,560 pixels) TFT display with 19:9 aspect ratio. The Samsung Galaxy M01 is also tipped to be powered by the 1.95GHz Snapdragon 439 octa-core SoC, paired with 3GB RAM and 32GB of internal storage. The phone is also said to support storage expansion via a microSD card slot.

The leak also suggests that the Samsung Galaxy M01 will support face recognition, and offer features like Dolby Atmos and Samsung Health. The phone will run on One UI, and pack a 4,000mAh battery. Dimensions are expected to be at 146.3x70.86x9.8mm.