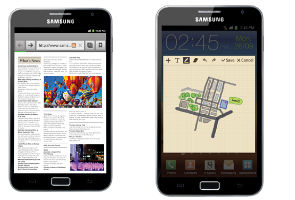 Highlights
Is it a phone? Is it a tablet? Guess what - the Samsung Galaxy Note is both. With this, you can make calls, text, sketch and write notes, and browse the web on a larger-than-phone screen.

Launched in India today, the Galaxy Note is a hybrid between a smartphone and a tablet. It features a a 5.3-inch HD Super AMOLED display with a resolution of 1280 x 800. The device will run on Android Gingerbread 2.3 skinned with Samsung TouchWiz 4, which includes Samsung's Live Panel UX. The rear of the device has an 8 MP camera with LED flash and the Front has a 2 MP. The rear camera is capable of full HD 1080p recording at 24/30fps. It supports 16GB internal memory expandable up to 32GB via microSD card.

Apart from being a capacitive touch screen, the device also supports S Pen (Advanced smart pen) for additional inputs. The device runs on a standard Li-on 2,500 mAh battery. The Galaxy Note is priced at Rs 34,990.

Previously, Dell released the Streak with similar features and a 5-inch display. However, it received a lukewarm response from the press and consumers due to its clunky form factor and lackluster performance. By launching the Galaxy Note, Samsung intends to revive this category.
Comments