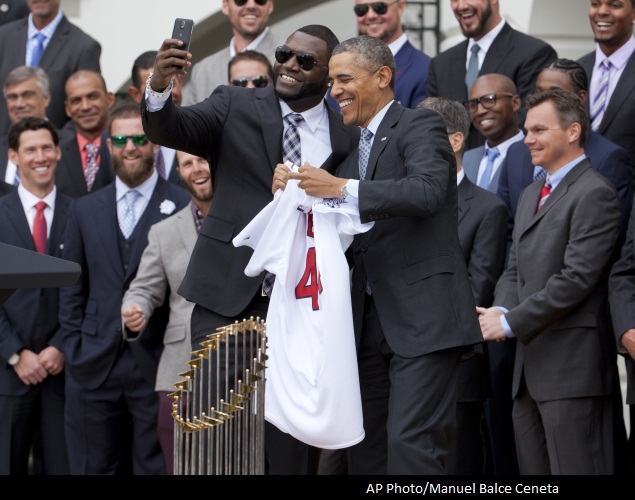 Boston Red Sox baseball player David Ortiz snapped a selfie with the president at a White House event using a Samsung phone and tweeted it to his followers Tuesday. It was resent by tens of thousands of Twitter users, and Samsung retweeted the photo as an ad. The company also said in a tweet that the photo was taken with a Samsung phone.

The White House press secretary said Wednesday that Obama was not aware of the marketing stunt. Ortiz's agent did not respond to questions.

Remind anyone of Ellen DeGeneres' celebrity-happy selfie from the Oscars? That was also taken with a Samsung phone and retweeted millions of times.

Samsung, the world's largest maker of smartphones, is making a name for itself as an aggressive, off-beat marketer. The company used its outsized ad budget to poke fun at its top rival, iPhone maker Apple, as well as people who purchase Apple products. It was also an Oscars sponsor and has a deal with Ortiz.

In its latest fiscal year, Samsung spent roughly $4 billion on advertising, about four times as much as Apple. Although Samsung makes TVs, refrigerators and other products, analysts believe much of the marketing is for newer products such as phones.

Samsung splashed the Oscars ceremony with phones and encouraged student presenters to post photos taken with the gadgets.

As for Ortiz, "When we heard about the visit to the White House, we worked with David and the team on how to share images with fans," Samsung said. "We didn't know if or what he would be able to capture."

Samsung was tight-lipped on the nature of its relationship with him. But the baseball player told the Boston Globe Wednesday that he signed a deal with Samsung a few months ago and the company gives him "phones and other stuff."

The Obama selfie "wasn't anything on purpose," Ortiz told the Globe. "I would say I went along just like everyone else taking pictures and posted."