Samsung Galaxy Z Flip is reported to feature a dual camera setup at the back, an Infinity-O display up front, and a small external second screen for showing time and notifications. 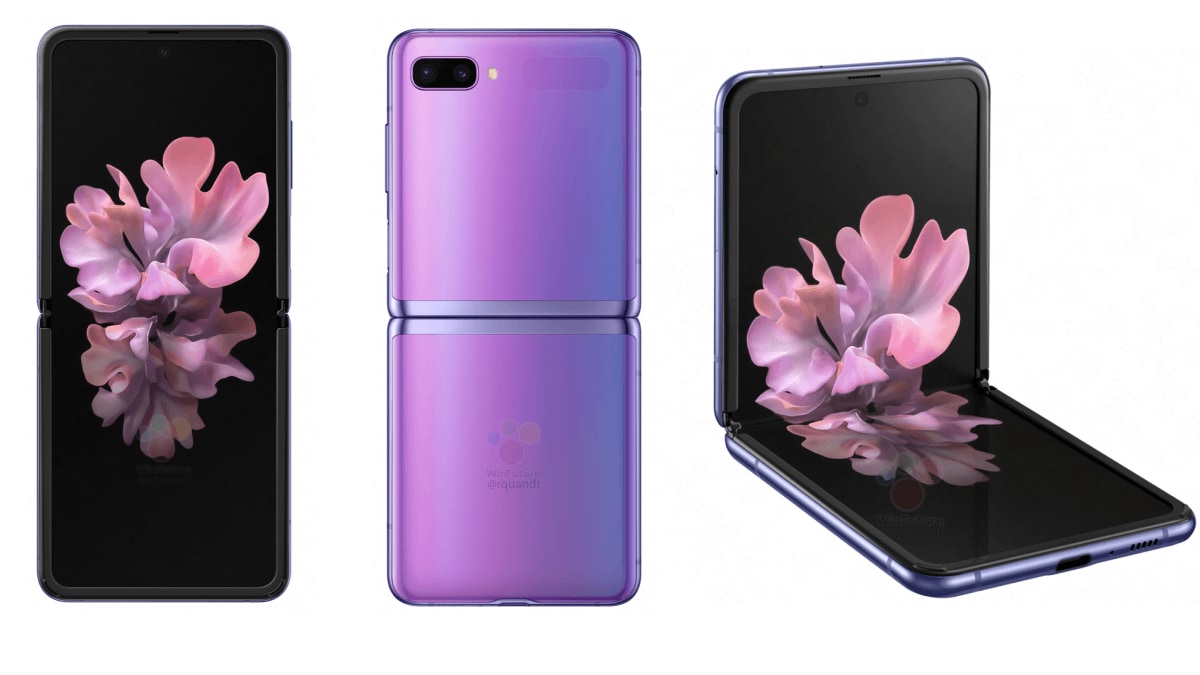 Samsung Galaxy Unpacked event is just days away, and the company is largely expected to unveil its second foldable phone alongside the Galaxy S20 series at the event. Believed to be called Galaxy Z Flip, the rumoured foldable phone is reported to sport a clamshell-like foldable design, and the official-looking renders of the phone have now leaked online. In these new images, the phone can be seen from all angles, revealing the hinge, the foldable display, and the camera placements. The phone has surfaced in two colour options – Black and Purple – but more colour could be unveiled at the February 11 event. Detailed specifications, pricing, and availability of the phone have also been leaked alongside.

Tipster Evan Blass and WinFuture have published the official-looking renders of the Samsung Galaxy Z Flip foldable phone. The renders show that the phone can be folded vertically in the middle like traditional flip phones. It is seen to carry dual rear cameras and an Infinity-O display with the selfie camera cutout placed in the centre. The display is protected by a thin glass that reportedly brings significant improvements in flexible screen durability, and there's also a visible protruding bezel surrounding the display to protect it further. The renders show that the speaker grille and USB Type-C port are situated at the bottom edge, the fingerprint sensor is seen on the side, and a small second screen can be seen on the outer shell as well.

Coming to the specifications, the WinFuture report says that the Galaxy Z Flip is expected to run on Android 10-based One UI 2.0, and feature a 6.7-inch (1080x2636 pixels) Infinity Flex screen with HDR10+ and 22:9 aspect ratio. With the help of the hinge, the phone can be freely opened at an angle between 70 to 110 degrees. As mentioned, there is a second external display that is just 1.06-inch (116x300 pixels) in size with a Super AMOLED panel and Gorilla Glass 6 protection. The always-on display is meant for showing time and notifications.

The Galaxy Z Flip is reported to be powered by the Snapdragon 855+ SoC, paired with 8GB of RAM and 256GB of internal storage. The report says that there will be no microSD card support. As for cameras, the foldable device is seen to sport two cameras at the back with a main 12-megapixel f/1.8 shooter, and another 12-megapixel camera with 123 degree field of view and a f/2.2 aperture. Up front, the Galaxy Z Flip is tipped to sport a 10-megapixel camera with f/2.0 aperture and autofocus support.

The WinFuture report also shared the expected price of the Galaxy Z Flip, and it states that the phone will be available in Europe from February 14 next month for a price of EUR 1,500 (roughly Rs. 117,600).

Facebook Rolls Out Tool to Give Its Users More Control Over Data Gathered From Other Sites, Apps
Apple HomePod Price in India Revealed, Set to Go on Sale 'Soon'