Samsung Galaxy Z Flip is tipped to be priced at EUR 1,500 in Europe, and a new Mirror Gold colour option is expected to be launched alongside the Black and Purple finishes. 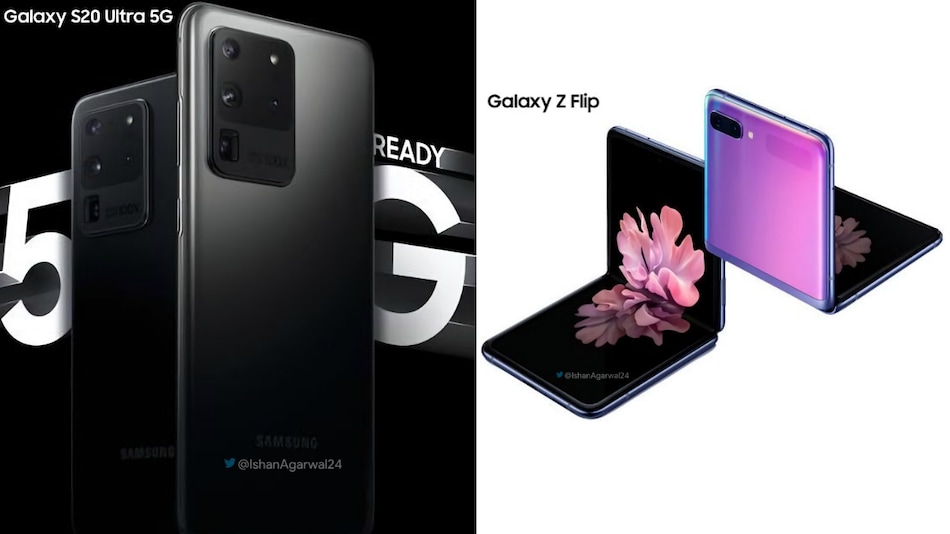 Samsung Galaxy Z Flip is rumoured to launch on February 11

Samsung Galaxy Z Flip has leaked in another video, showing off the phone's clamshell-like design. The video reveals that the phone folds vertically, as seen in all recent renders, and the display stays turned on, even when the display is folded in various angles. At the back, the dual camera setup is spotted, and the small secondary display can also be seen, however the notifications weren't live on this variant. The Samsung Galaxy Z Flip is expected to be unveiled at the Galaxy Unpacked event on February 11. A separate render of the Galaxy Z Flip and the Samsung Galaxy S20 Ultra have also surfaced online, with additional price and colour details about the foldable phone as well.

The video leak showing off the Samsung Galaxy Z Flip has been shared by tipster Ben Geskin (now deleted), sourced from a private user on Instagram. It shows the device's display being turned on even when left open at an obtuse angle or even at an acute angle. The back of the phone is heavily shielded with a case, keeping the hinge design hidden. The dual cameras at the back do pop out from the shield cut-outs, and there's small external display as well. The Galaxy Z Flip is seen to sport a hole-punch or Infinity-O Display with the cut out for the selfie camera placed in the centre. The volume button and the side-mounted fingerprint sensor are spotted on the right edge, and the USB Type-C port and the speaker grille are seen at the bottom edge of the phone.

The Galaxy Z Flip has also leaked in yet another render, shared by tipster Ishan Agarwal. It corroborates everything that has already been seen on the video, and the phone is seen sporting a purple finish. He has also tipped that Samsung will unveil a Mirror Gold colour option, apart from the Black and Purple options that have already leaked in the part. Furthermore, he says that the Galaxy Z Flip will weigh 183 grams, and will feature a Pro Video Mode as well. He also tips that when the phone is propped open at an angle, not necessary 180 degrees, there will be software enhancements like a separate viewing area and a separate control area for users. Finally he leaks the price of the Galaxy Z Flip to be EUR 1,500 (roughly Rs. 117,400).

Agarwal has also leaked a new official poster of the most premium variant of the Galaxy 20 family – the Samsung Galaxy S20 Ultra. Only the back portions of the phone are seen, and the quad camera setup is spotted, with the periscope lens situated at the bottom with 100x zoom printed next to it. The dual tone rectangular module design is seen at the back, and the phone is tipped to come in two shades of Black. Both the Galaxy S20 series and the Galaxy Z Flip are rumoured to go official at the Unpacked event on February 11.