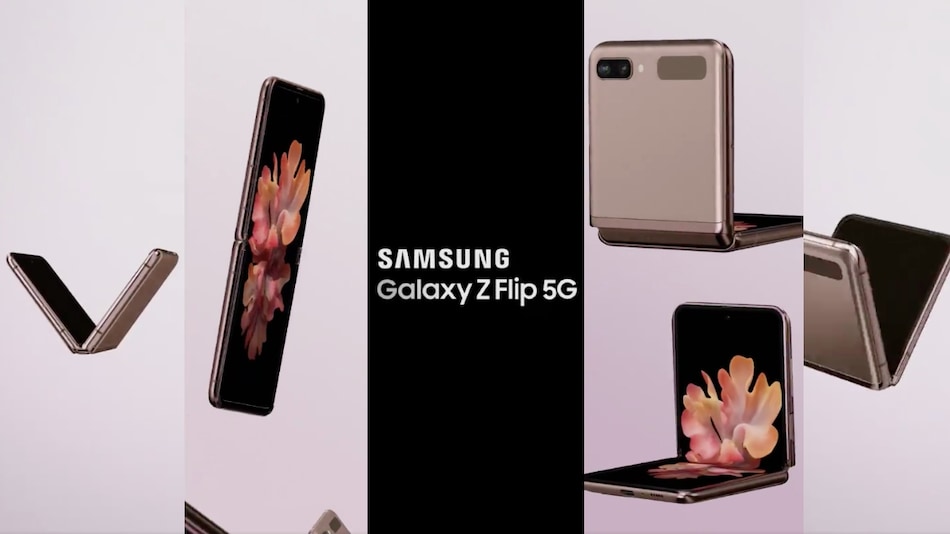 Samsung Galaxy Z Flip 5G video promo has been leaked online that purportedly shows off the foldable phone from all sides. The new Samsung phone appears to have an identical look and feel to the LTE version of the Galaxy Z Flip that was launched back in February. Separately, some key specifications of the new Samsung phone have surfaced on the Web that suggest even some minor changes on the part of internals as well. The Galaxy Z Flip 5G is rumoured to come with an octa-core Qualcomm Snapdragon 865+ SoC. There would also be slight changes on the dimensions front.

Tipster Evan Blass has leaked the video of the Samsung Galaxy Z Flip 5G on Twitter. It suggests that there aren't any noticeable changes over the original Galaxy Z Flip model. However, you'll certainly get 5G support on the new offering, which isn't there previously. The tipster has also suggested that there would be a new colour option, called “Mystic Bronze”.

As per Max Weinbach of XDA Developers, the only change between the Samsung Galaxy Z Flip 5G and its 4G model is the presence of the Qualcomm Snapdragon 865+ SoC on the former over the Snapdragon 855+ on the latter. He also mentions that there will be a “negligible amount” of changes on the part of dimensions. The new phone will be basically 0.5mm thicker and 0.1mm taller than its existing version.

In addition to the new leaks, a support page of the Galaxy Z Flip 5G has purportedly been listed on the Samsung Hungary website with a model number SM-F707B. This is notably the same model number that appeared on a Geekbench listing last month.

The Samsung Hungary site doesn't reveal any details about the Galaxy Z Flip 5G. However, it does suggest that the new phone is incoming.

Samsung is hosting its Galaxy Unpacked event on August 5 where it is expected to unveil the Galaxy Note 20 series. At that event, the South Korean company is also likely to showcase the Galaxy Z 5G.