Samsung Galaxy Z Flip 5G to Be Launched in China on July 22: Report

Samsung is expected to globally launch the Galaxy Z Flip 5G at its Galaxy Unpacked event on August 5. 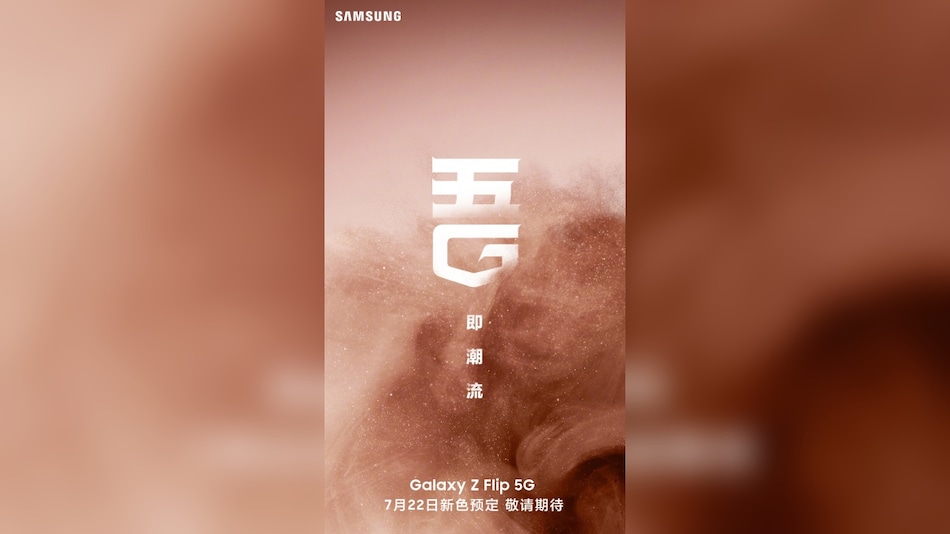 Samsung Galaxy Z Flip 5G will launch in China on July 22. The South Korean giant revealed the news on Weibo. The upcoming 5G phone was earlier spotted on the Chinese regulatory body TENAA's website and some of its specifications were also tipped online. It is speculated that the Galaxy Flip 5G may be powered by an octa-core Qualcomm Snapdragon 865+ SoC. Earlier this month, video leaks of the Galaxy Z Flip 5G surfaced online as well, offering a glimpse of what Samsung's latest offering may look like upon launch.

Samsung took to Weibo to share a launch poster, as spotted by GizmoChina, revealing that the Galaxy Z Flip 5G will debut in China on Wednesday (July 22). The post also said that “new colours are scheduled (translated).” Samsung is expected to globally launch the 5G variant of the Galaxy Z Flip at its online Galaxy Unpacked event on August 5. However, going by the new post, it is expected that the device will first be launched in the Chinese market well before the occasion.

It was earlier reported that the Galaxy Z Flip 5G was spotted on TENAA. The listing suggested that the device may feature a dual battery system with a total capacity of 3,204mAh. It was also speculated that the 5G variant of Galaxy Z Flip may feature two screens just like its predecessor, with the smaller display being 1.05 inches in size. Gadgets 360 was unable to verify this listing.

A few more details of the upcoming phone were also tipped by Digital Chat Station (translated) on Weibo. While Galaxy Z Flip 5G is expected to come with AMOLED displays, its foldable primary screen could be a 6.7-inch one with a resolution of 1,080x2,636 pixels. In terms of camera, it is tipped to carry a 12-megapixel sensor on the front for selfies, along with a dual camera setup on the back with 12-megapixel and 10-megapixel sensors.

Expected to be the first phone to be officially launched with the Snapdragon 865+ SoC, the Galaxy Z Flip 5G may also come with support for 15W fast charging.

Tipster Evan Blass had also reportedly leaked a video promo of the device on Twitter, offering a view of the foldable phone from all sides. Apart from a new colour variant – Mystic Bronze – the leak didn't offer any noticeable design changes over the original Galaxy Z Flip.

Google Pixel 4 XL Glass Back Peeling Off, Some Users Complain