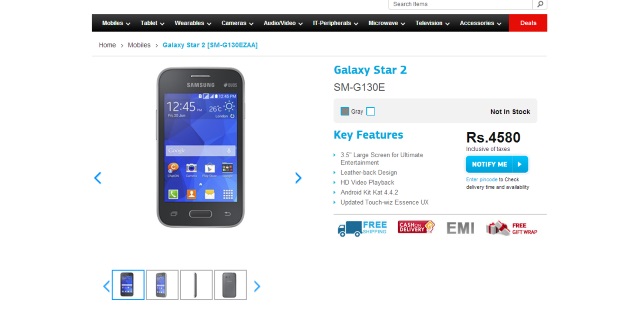 The Samsung Galaxy Star 2 is now officially listed on the company's India e-store, priced at Rs. 4,580. However, the listing notes that the smartphone is 'not in stock' currently.

Launched alongside the Galaxy Star Advance and Galaxy Ace NXT, the Samsung Galaxy Star 2 was officially announced at Rs. 5,100 last month without any availability details revealed.

At the India launch, the South Korean giant had confirmed that the Galaxy Star 2 will be come with support for 12 Indian languages including Assamese, Bengali, Guajarati, Hindi, Kannada, Marathi, Malayalam, Oriya, Punjabi, Tamil, Telugu, and Urdu.

The smartphone sports a 2-megapixel fixed focus rear camera. The company has claimed that the camera comes with features such as shot mode (auto, night, Panorama, and sound and shot), and photo effects (Black and White, Negative, and Sepia).

The Galaxy Star 2 also comes with FM radio with recording feature. It includes 4GB of inbuilt storage which is further expandable up to 32GB via microSD card. It includes Bluetooth 4.0, Wi-Fi b/g/n, and Micro-USB connectivity options.

The Galaxy Star 2 does not come with 3G network support and comes with 109.8x59.9x11.8mm dimensions, while weighs 108 grams. It packs a 1300mAh battery, and will be available in Grey and White colour variants.