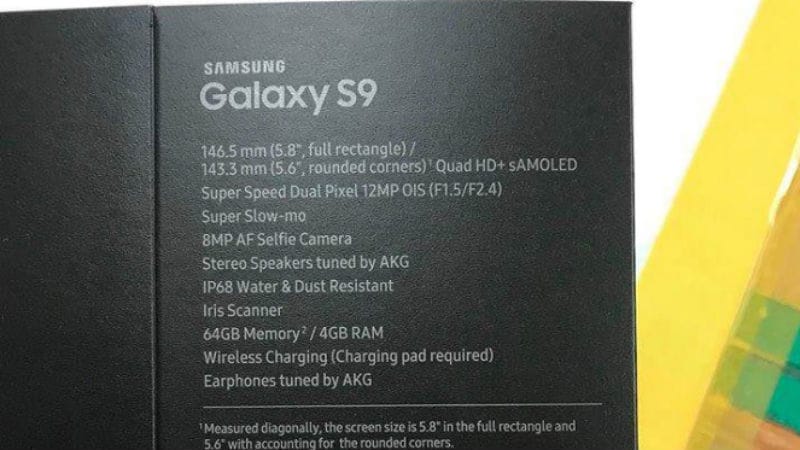 While the tech world is looking forward to the Galaxy S9 launch at the Mobile World Congress (MWC) 2018, an image showing an alleged retail box of Samsung Galaxy S9 has emerged online to detail some of the key features of the upcoming flagship. The box shows the presence of a 'Super Speed' camera on the upcoming Galaxy model alongside revealing stereo speakers tuned by AKG. Previously, Samsung bundled AKG-tuned earbuds with the Galaxy S8 and Galaxy S8+ to deliver an enhanced audio experience.

The image, which has surfaced on Reddit, details various key specifications of the Galaxy S9. It shows that the handset will come with a 5.8-inch QHD+ Super AMOLED display with rounded corners, similar to the last year's Galaxy S8. The box also mentions an 8-megapixel AF selfie camera, IP68-certified water- and dust-resistant build, Iris scanner, 4GB RAM, 64GB onboard storage, and wireless charging support. Having said that, what's the most noticeable mentioning on the box is the Super Speed technology that accompanies a Dual Pixel 12-megapixel camera sensor. The new camera tech will also enable the smartphone to offer a 'Super Slow-mo' mode.

Alongside the Super Speed technology, the leaked image shows that the Galaxy S9 camera will come with optical image stabilisation (OIS) and have two different aperture sizes - f/1.5 and f/2.4. The variable aperture could potentially allow the user to pick the one that best suits the environment.

The box also specifies that the Samsung Galaxy S9 will include stereo speakers tuned by AKG as well as AKG-tuned earphones. It is yet to be revealed whether the smartphone would have two front-firing speaker modules, similar to the Pixel 2 XL, or one bottom speaker and one hidden under the front-facing earpiece, just like the iPhone 7 or iPhone 8 models.

Notably, the box appeared in the image matches the one that comes with the Galaxy S8 and Galaxy S8+. We can't comment on its authenticity, though.

As Samsung's Mobile Communications Business President DJ Koh at a CES press conference confirmed, the next Galaxy S-Series flagship will debut at MWC 2018 next month. The new flagship, being the successor to the Galaxy S8, is expected to come in two variants - the Galaxy S9 and Galaxy S9+. Some early reports have claimed that the Galaxy S9 family will come with an improved iris scanner and enhanced Infinity Display panels. A recent Geekbench listing highlighted that both the new smartphones will have an octa-core Qualcomm Snapdragon 845 SoC and run Android 8.0 Oreo out-of-the-box. Moreover, the global versions of the new Galaxy S9 models are expected to have an Exynos 9810 SoC that was unveiled earlier this month with artificial intelligence (AI) features and better face recognition capabilities.

Between the two, the Galaxy S9+ is rumoured to have 6GB of RAM and up to 512GB of storage. The company is also said to add a dual camera setup to the bigger variant in the new Galaxy S family that is also likely to come with the spotted Super Speed technology.