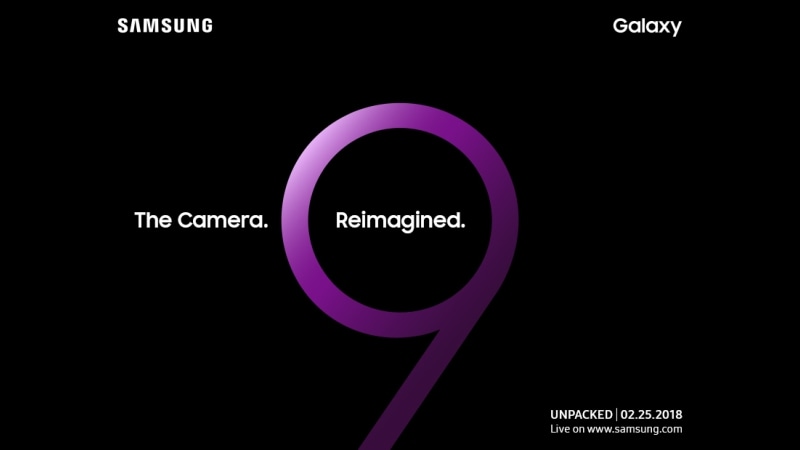 Samsung Galaxy S9 will be launched at the Samsung Galaxy Unpacked 2018 event at 12pm ET (10:30pm IST) on February 25, ahead of Mobile World Congress (MWC) 2018 next month. The South Korean giant on Wednesday released the invitation for the event where the Galaxy S9+ is also expected to make its appearance. The invite teases the appearance of upgraded camera technology on the Galaxy S9.

As you can see, the launch of the Samsung Galaxy S9 is apparent from the '9' mentioned on the invite. "If a picture is worth a thousand words, the latest member of the Galaxy family has a lot to say. On February 25, Samsung Electronics will showcase the next generation of Galaxy devices that reimagines the camera and redefines the way you share your moments." writes the company, alongside the invite.

Samsung is planning to incorporate a significantly upgraded camera on the upcoming phones. Previous rumours have pointed towards the new ISOCELL module that Samsung launched back in October last year. This technology uses Samsung's Tetracell technology to enhance low light images, offering an upgrade to Dual Pixel. Additionally, there is a Smart WDR feature that enables the sensor to capture multiple exposures in one shot.

Apart from ISOCELL, rumours have also hinted towards an f/1.5 aperture lens on the rear camera setup of the phones. The phones are expected to have a variable aperture of f/1.5 to f/2.4 giving the sensor DSLR-like capabilities. The Galaxy S9+ is touted to sport a dual lens setup while the Galaxy S9 might have a single lens on the back.

Separately, a recent leak of a Samsung Galaxy S9 retail box tipped the smartphone will have 'Super Speed' camera technology, in the form of a Super Speed-backed Dual Pixel 12-megapixel rear camera sensor, apart from a 'Super Slow-mo' mode and optical image stabilisation (OIS). The box also showed the presence of an 8-megapixel AF selfie camera on the front, and box corroborates the two different aperture sizes - f/1.5 and f/2.4. The Galaxy S9 box also showed the presence of AKG-tuned stereo speakers as well as AKG-tuned earphones. Finally, the box listed a 5.8-inch QHD+ Super AMOLED display with rounded corners.

Back in December, Geekbench listings had revealed that the Galaxy S9 duo might be powered by the Qualcomm Snapdragon 845 processor. The global versions of the new Galaxy S9 models can be expected to have to run on Samsung's Exynos 9810 SoC that was unveiled earlier this month with artificial intelligence (AI) features and better face recognition capabilities.