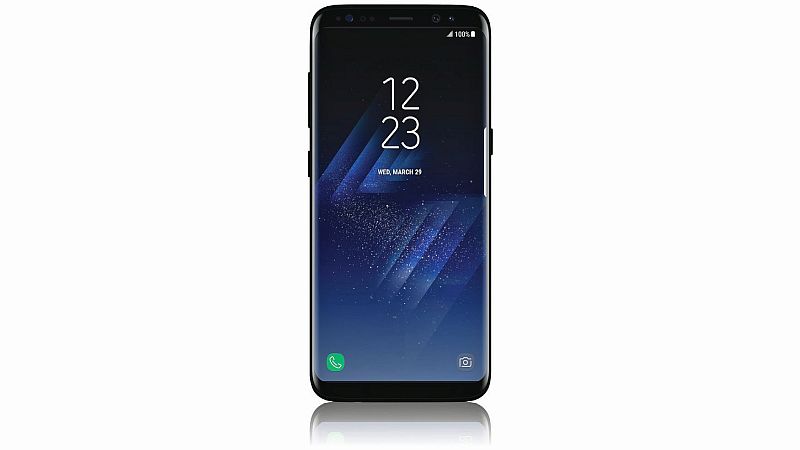 Samsung's Galaxy Unpacked 2017 event may be weeks away but there has been no shortage of leaks related to the Galaxy S8 flagship which is expected to make a debut later this month. The latest leaks claim that the Samsung Galaxy S8's near bezel-less display may be dubbed 'Infinity Display' while another rumour says that the new Samsung flagship will go up for pre-orders starting April 10. Additionally, the new Galaxy S8 has been spotted in new leaked video showing a Black coloured variant ahead of official launch.

As per a recently spotted trademark at the USPTO, Samsung has trademarked the 'Infinity Display' name which is believed to be the term for the Galaxy S8's new screen with 18:9 aspect ratio. The 'Infinity Display' could very well be Samsung's very own version of FullVision Display which was introduced by LG on the new LG G6. The leaked images of the Galaxy S8 have so far claimed long and narrow display on the handset. This tips that the company may adopt the 18:9 aspect ratio, rather than the current industry standard of 16:9. The trademark was first spotted by GalaxyClub.

Separately, Samsung's upcoming flagship smartphone Galaxy S8 is said to go on pre-orders from April 10. Several reports have suggested that the Samsung Galaxy S8 along with the Galaxy S8+ will be available worldwide from April 21. The Investor report cites industry sources for the pre-order date.

Lastly, a new video has surfaced showing a test unit of the Galaxy S8. The 5-seconds video shows the unannounced Samsung Galaxy S8 in Black, and once again the dedicated button for Bixby is seen, which is Samsung's new AI assistant said to work with native apps as well. The video was first posted on YouTube by Slashleaks.

Samsung Galaxy S8 is all set launch at the company's Galaxy Unpacked 2017 event on March 29.