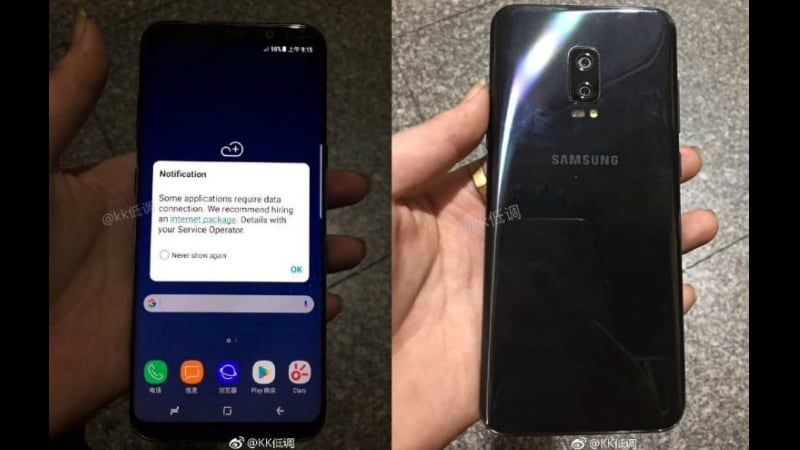 Before the official launch of the Samsung Galaxy S8 and Samsung Galaxy S8+, the larger variant was tipped to sport the dual camera setup, but we didn't see it launch at the event in New York. Samsung later launched a 6GB RAM, 128GB storage variant in South Korea and China, and now a fresh leak suggests that a dual camera variant may also be in the offing.

A live image leak on Weibo suggests that a Samsung Galaxy S8+ variant with dual camera setup may be in the works. The two sensors at the back are placed vertically below each other, with the heart rate sensor and flash placed right after them. Interestingly, there is no fingerprint scanner at the back, or at the front, and Samsung is expected to embed a fingerprint reader underneath the screen.

Apparently, Samsung was not satisfied with the optical fingerprint technology before launching the Samsung Galaxy S8 last month, but is now confident enough to launch it on its new variant. The Samsung Galaxy Note 8 expected to launch later this year, will also introduce this new technology for fingerprint scanning. Reportedly, Samsung has worked with Synaptics to make the onscreen fingerprint sensor. All the other specifications of this variant are expected to be similar to that of the Galaxy S8+.

Samsung is set to launch both the smartphones in India on Wednesday at an event in Delhi, where pricing and availability details will be unveiled. The device is up for pre-registrations on the company website. The Galaxy S8 and Galaxy S8+ are identical smartphones, with the only difference being the screen size of what the company calls the Infinity Display - featuring dual-edge curved display, minimal bezels on the top and bottom, and 18.5:9 aspect ratio - and the battery capacity.