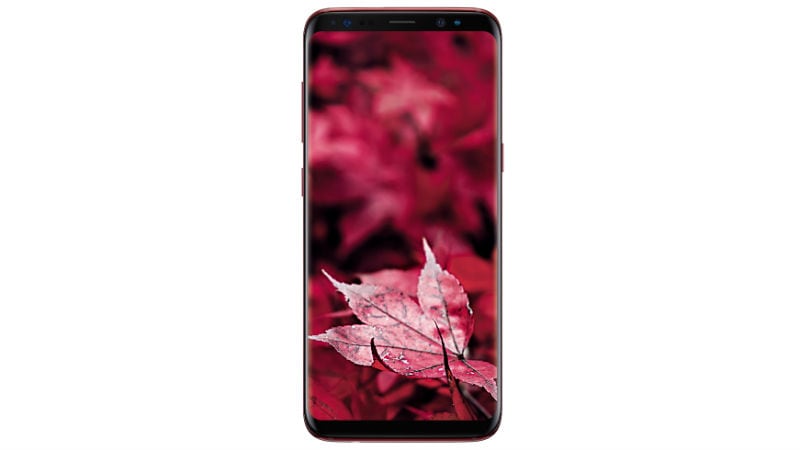 Samsung India on Monday announced the launch of its last year's Galaxy S8 smartphone in a Burgundy Red colour. The South Korean giant had launched the Galaxy S8 series in April 2017 as its flagship smartphones. Initially, the handsets were available in Maple Gold and Midnight Black colour variants and, later in July, the company unveiled an Orchid Grey coloured model of the Galaxy S8.

The Burgundy Red colour variant of the Galaxy S8 comes just a month after Samsung launched its latest flagships - Galaxy S9 and Galaxy S9+ - in the market. The company says that the Galaxy S8 "continues to be a bestseller" even one year after its launch. "The Burgundy Red edition of Galaxy S8 will wow consumers and allow them to express their own personal style,' said Aditya Babbar, General Manager, Samsung India

To recall some of the specifications, the Galaxy S8 is powered by the Samsung Exynos 8895 SoC and it had started receiving the Android 8.0 Oreo update earlier this year. The Galaxy S8 sports a 5.8-inch QHD+ (1440x2960 pixels) Super AMOLED Infinity Display, which is a dual-edge curved display with an 18.5:9 aspect ratio, complete with Corning Gorilla Glass 5 protection. The smartphone comes with 4GB of RAM and 64GB of inbuilt storage that's expandable via microSD card (up to 256GB) in a hybrid dual-SIM configuration.

The Galaxy S8 features a 12-megapixel 'Dual Pixel' rear cameras with optical image stabilisation and a f/1.7 aperture. On the front, the smartphone bears an 8-megapixel front camera with autofocus, and also bear an f/1.7 aperture. The handset is fuelled by a 3000mAh battery, and supports wireless charging and fast charging.