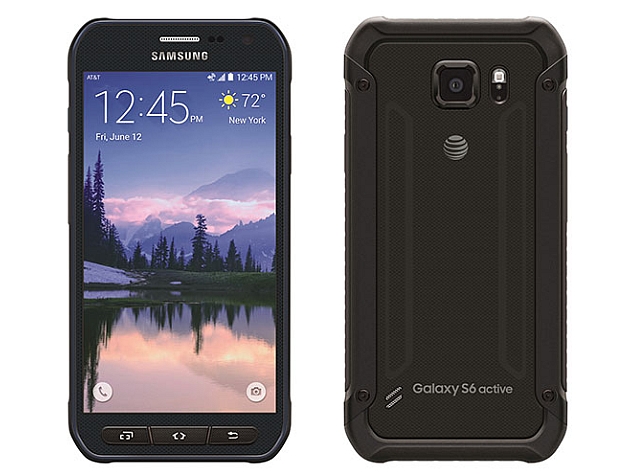 After several leaks, rumours, and official listings, Samsung has finally made the Galaxy S6 Active smartphone official and made it exclusively available on AT&T in the US.

The Samsung Galaxy S6 Active will be available starting June 12 from the AT&T website and via the company's physical retail store. While Samsung is yet to reveal the price of the handset, it does mention the instalment details of the device - $0 down payment on AT&T Next for $23.17 per month with 30 device payments on Next 24, $28.96 per month at 24 payments on Next 18, or $34.75 per month at 20 payments on Next 12. The Galaxy S6 Active will also be available for purchase in on-site shops at upcoming Reebok Spartan Race events. The device's availability outside US has not been revealed as of yet.

The Samsung Galaxy S6 Active, features very similar specifications to the original flagship, but in addition sports and IP68 rating that makes it water resistant (up to 1.5 metres for 30 minutes), dust proof, and shock resistant. It also meets the US Mil-STD-810G standard for withstanding vibration, temperature extremes, humidity, and high altitude. The smartphone as expected misses out on fingerprint sensor, which was placed at the home button of the flagship Galaxy S6 and Galaxy S6 Edge smartphones. The handset instead sports three physical buttons - home, back and multi-window.

The Galaxy S6 Active features a 5.1-inch Quad HD (1440x2560 pixels) Super Amoled display with a pixel density of 577ppi. Running on Android 5.0.2 Lollipop the smartphone runs on Samsung's octa-core 64-bit processor, which is said to be the Exynos 7420 processor.

There is a 16-megapixel rear camera and LED flash while there is a 5-megapixel front camera on board. Although not mentioned by the firm, the Galaxy S6 Active is likely to feature a slew of camera features such as quick launch, tracking AF, auto real-time HDR, f/1.9, IR detect white balance, low light video, high clear zoom, virtual shot, slow motion, fast motion, pro mode, and selective focus, like the flagship Galaxy S6. 32GB of inbuilt storage is also included.

The Galaxy S6 Active is backed by a 3500mAh battery with wireless charging clubbed with Ultra Power saving mode and fast charging tech. Also, some "Activity Zone" features such as quick launching compass, flashlight, stopwatch, and more have been included. The smartphone also comes pre-installed with the Samsung Knox security framework.

"With the Galaxy S6 active, we're delivering consumers with high durability coupled with the powerful performance of Samsung's latest flagship smartphone," said Tim Baxter, President & COO & Mobile Division GM of Samsung Electronics America during the launch. "The result is a smartphone that brings ruggedized capabilities and water resistance coupled with the camera, battery and design features that empower our consumers and business users to do more."