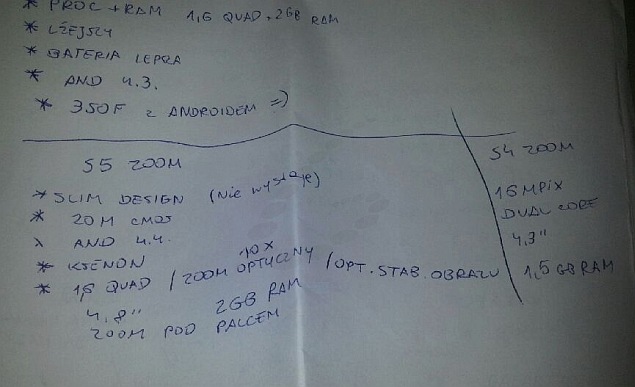 Details of the Samsung Galaxy S5 Zoom have been leaked online for the second with some new information on specifications and its design. However this new leak has some specifications that are slightly different from what was first shared on the internet.

The latest news comes from a Polish website, Galaktyczny.pl, which mentioned that the smartphone was shown in a conference between some of the Samsung officials and was strictly confidential. According to the website, the Samsung Galaxy S5 Zoom is slimmer than the Samsung Galaxy S4 Zoom and that the smartphone's "lens is much better hidden in the casing." The camera is of course the main feature of the new handset, and is said to have a 20-megapixel sensor, 10x optical zoom, image stabilisation and also a Xenon flash. Aside from these imaging features, the Samsung Galaxy S5 Zoom is also expected to include a physical camera shutter button and a throttle to control the zoom, both of which make it easier to take pictures.

The screen of the Samsung Galaxy S5 Zoom is rumoured to be a 4.8-inch display covering almost the entire front of the device. The handset uses the Android KitKat OS, and it is said to be efficient and faster as it might be powered by a quad-core processor clocked at 1.6GHz paired with 2GB of RAM.

The Samsung Galaxy S5 Zoom smartphone was first spotted in a GFXBench test earlier this month. Interestingly, there are some differences in the specifications in the two leaks.

While the Android version, screen size and RAM remain the same, the benchmarks revealed the smartphone to feature a 720p HD screen, 1.3GHz hexa-core (Samsung Exynos 5 Hexa) CPU and a Mali-T624 GPU. Additionally, the earlier leak suggested that the Samsung Galaxy S5 Zoom has a 19-megapixel rear camera and a 2-megapixel front-facing camera that can record Full-HD videos. On the storage front, the Samsung SM-C115 (rumoured S5 Zoom) device is listed with two reported storage capacities, which likely means that a dedicated memory card slot will be present, too.