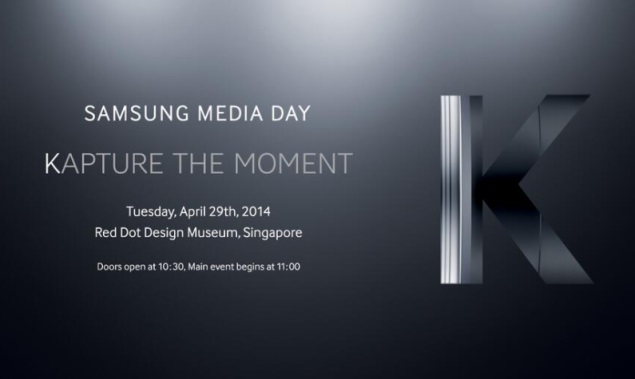 Samsung has started teasing its 'Kapture The Moment' event, scheduled for 29 April, where the company hints at an upcoming camera-centric smartphone.

The official teaser has been shared by Samsung Mobile's official Twitter handle and does not reveal much about the product. The tweet by Samsung reads, "Kapture the moment. April 29. Mark your calendars!"

Further, the teaser image has the letter 'K' printed in large fonts, which suggests that the alleged Galaxy S5 Zoom might be dubbed Galaxy K Zoom.

In-line with the teaser image, a publication has claimed that the Samsung Galaxy K Zoom is the South Korean giant's next mobile and camera hybrid device.

Earlier reports suggest that the alleged Samsung Galaxy K Zoom's camera will pack a 20-megapixel sensor, 10x optical zoom, image stabilisation and also a Xenon flash. Aside from these imaging features, the Samsung Galaxy S5 Zoom is also expected to include a physical camera shutter button and a throttle to control the zoom, both of which would make it easier to take pictures.

The screen of the Samsung Galaxy K Zoom is said to be 4.8-inch display covering almost the entire front of the device. The handset runs Android KitKat, and it is likely to be powered by a quad-core processor clocked at 1.6GHz paired with 2GB of RAM.

The rumoured Samsung Galaxy K Zoom smartphone was first spotted in a GFXBench test in March.