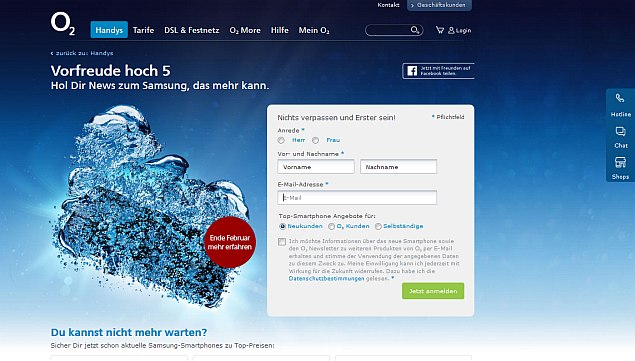 As the Mobile World Congress nears, more number of teasers and leaks for the Samsung Galaxy S5 are surfacing online. This time, a UK-headquartered mobile carrier, O2, has teased the Galaxy S5 in an image on its German website, hinting the carrier to be among the first to bring the proposed smartphone.

The Samsung Galaxy S5 webpage on O2 site lets user register for further updates regarding the availability of the handset with the carrier, and states "Get news about Samsung that can do more." The website nowhere mentions the name "Samsung Galaxy S5" but the link does. The webpage is also titled as "Anticipation High 5."

The image of a black-coloured handset, which is not shown clearly, also states in German "Ende Februar mehr erfahren", which means "The end of February to learn more" which almost ties in with expectations that the Samsung Galaxy S5 launch at MWC 2014, at the Samsung unPacked 5 event on 24 February. Seeing as the teaser image features a handset in water, there is a slight possibility that the Galaxy S5 may just be waterproof, like the Sony Xperia Z and Xperia Z1, though none of the previous leaks have indicated this feature, so we remain a little sceptical.

A recent leak emerging from Korea allegedly reveals that the yet-to-be-announced Galaxy S5 might come with a bezel-free display, which will be the first device in Samsung's Android smartphone line-up to feature no rim around the screen and a featured fingerprint scanner.

At roughly the same time, a leaked screenshot purportedly showed icons in what seems like the settings area of the Galaxy S5, icons that match the unPacked 5 event teaser from earlier in February. Spotted in the leaked screenshot were the Curiosity and Outdoor icons, part of the batch of 9 icons seen in the official teaser image.

We expect, based on previous reports, that the Samsung Galaxy S5 will be launched alongside a new tablet series, believed to be dubbed Galaxy Tab 4, and the long-rumoured Galaxy Gear successor, named Galaxy Gear 2 at the 24 February event in Barcelona at the sidelines of the MWC 2014.