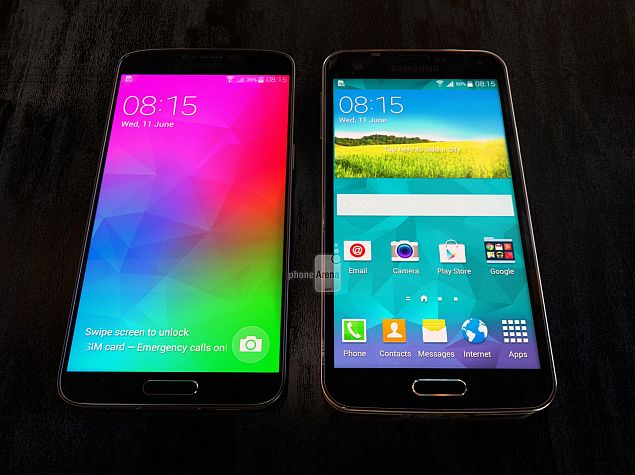 Samsung's much-rumoured Galaxy F smartphone, also known as Galaxy S5 Prime, has once again been leaked in an image, this time alongside a Galaxy S5 handset and showcasing a thinner bezel that similar to those on the recently announced LG G3.

The alleged image showing the rumoured Samsung Galaxy F, courtesy Phonearena, not only highlights the smartphone's LG G3-like thin side bezels, but also the slightly slimmer bezels on top and bottom also as compared to the Galaxy S5 (Review |Pictures), giving more room to the screen while maintaining a smaller profile.

A couple of days ago it was noted that the rumoured prime-variant of the Galaxy S5 might feature the Exynos 5433 SoC and Intel XMM7260 modem, like indicated in previous reports.

Earlier this week, the alleged Samsung Galaxy F's black colour variant was again teased in an image showcasing the brushed metal back panel. Other than that, the alleged premium Galaxy S5 variant will also have an aluminium chassis instead of the chrome plastic frame, as from an earlier report.

Some of the rumoured specifications of the handset include a 5.3-inch QHD (1440x2560 pixel) screen, a Qualcomm Snapdragon 805 processor, and 3GB of RAM. It is also reported to be a limited edition smartphone, due to the expensive nature of its Super AMOLED QHD display.

The Galaxy S5 Prime is expected to launch sometime in September alongside the iPhone 6. Samsung, with its to-be-announced Galaxy F smartphone could finally step away from its plastic image with the anticipated metal rear panels. For now, the firm has its metal Galaxy J smartphone out but that is only available in their home turf and has not been made available globally.

How to Train Your Dragon 2 Review: Like Animated Movies? You'll Love It
Google Fit Health Platform for Android Tipped to Debut at I/O 2014