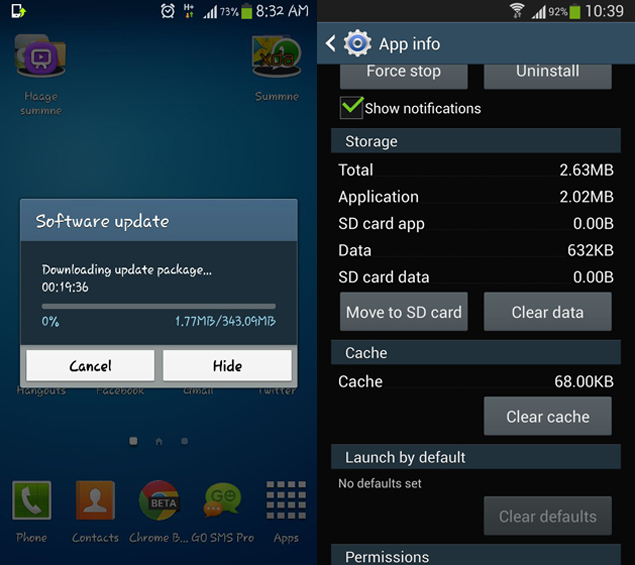 The update for Samsung Galaxy S4 that started rolling out earlier in Germany has now landed in India. Users on XDA Developers reported that the update is now available as an OTA update as well as through Kies.

The most notable feature that the update brings is the ability to move apps to the phone's microSD card. This will allow users to utilise the phone's external storage not just for storing multimedia content but for also installing apps. Previously, there was a lot of outrage over the phone's limited internal storage as the 16GB variant of the phone offered only 8.82GB to the user.

While Samsung had said that it was not really an issue as the phone came with a microSD card slot, it was not possible to install or move apps to the card. Samsung had later accepted that it was indeed a problem and that the company was working on a solution. It's now being reported that the new update also increases the available internal storage space to 9.23GB.

The 343.09MB update for the Samsung flagship smartphone also brings a new camera firmware. The phone can now record HDR video as well. It also fixes a smearing issue which led to users seeing a purple effect while scrolling a list on the phone. The update brings a toggle for Smart Pause, a semi-transparent status bar on the home screen, new icons in the Settings menu, secure boot status in the About phone menu option and a new option to increase legibility in the Display settings menu.

Users who wish to download the update can do so by going to the Software Update option in the About in Settings. In case you haven't received the update yet, you should receive it soon, as the roll out has already started in India.

HTC Butterfly S to launch on June 19: Report
Xbox One vs PS4: Let the next generation games begin