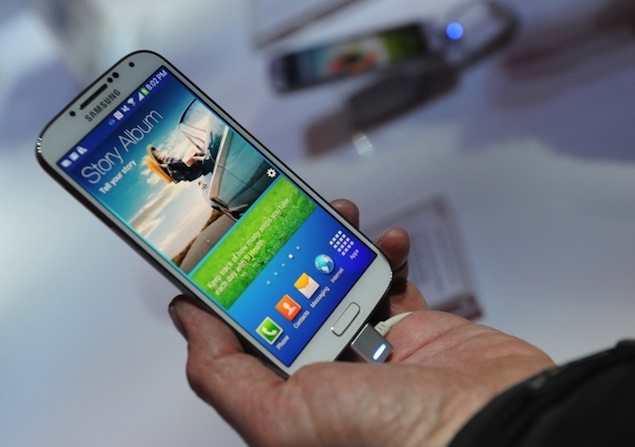 Samsung Galaxy S IV was launched amidst much fanfare at New York's Times Square. While the phone doesn't look much different from its predecessor, the Galaxy S III, in terms of design, it sports several new smart features. We've seen some in other phones, while a large set of them are totally new. Here's a look at ten such features:

1.Smart Pause/Smart Scroll: Samsung takes the Galaxy S III's Smart Stay feature a step further, and senses when you look at the screen of the phone or away from it, automatically scrolling up and down websites and e-mails, and pausing and resuming videos.

2.Air View/Air Gesture: With Air gestures you can simply move your hand to accept or reject calls, change music tracks, browse the web and your photo galleries without actually touching the phone. Air gesture, on the other hand lets you preview emails, photos and other content by hovering your finger over the screen.

3.Group Play: You can transfer and instantly view or play documents, music files, photos, and other content to other Galaxy S4 handsets.It even supports multi-player games.

4.S-Voice Drive: Samsung adds a new interface to its S-Voice voice assistant to offer functionality when you're driving.

5.S-Health: You can track your workouts, daily intake and weight, and monitor your blood pressure, and blood glucose levels with the app.

7.Dual camera features: The phone allows you to simultaneously shoot with its 13-megapixel rear and 2-megapixel front cameras. So you can place yourself in a group photo while shooting it or give a peek of your surroundings while being on a video call.

8.Sound & Shot feature: You can capture  up to 9 seconds of audio while capturing a picture to make it more interesting.

9.Drama shot: You can combine all stages of action that takes place in burst mode into one photo with this feature. So if you're taking a photo of someone running, you can combine many pictures to depict the act of running in one picture.

10.S-Translate: The phone translates voice and text on the fly through this tool. It is integrated with the e-mail and messaging app, in addition to being present through a standalone app.