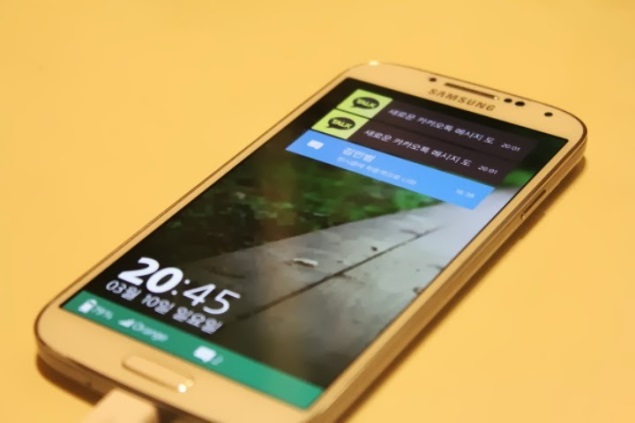 A pre-release version of Tizen 3.0 has been leaked out, running on the Galaxy S4, giving us a look at the alleged user-interface of the OS.

The site has posted a number of images of the device running Tizen 3.0 on top that reveal the lockscreen, which looks quite similar to Samsung's Touch UI. The images leaked reveal a vanilla UI which looks a bit familiar to Windows Phone UI. The notifications appear on the lockscreen along with some app controls which can be seen in the leaked image. Other UI features revealed by the leaked image include a Dial-pad interface which looks very similar to that of Android and the Music player which looks quiet colourful.

The Tizen 3.0 mobile operating system is expected to bring new features such as a secure app development environment and framework for social services and context claims the site. The site also notes that the Tizen 3 will be launched in early 2014.

Earlier, a report claimed that a Tizen-based SM-Z9005 handset was spotted on the UAProf (User Agent Profile) string on the company's mobile website. The alleged Tizen-based SM-Z9005 is reportedly said to come with a HD display, however the screen size has not been revealed, yet. It is likely to be powered by a Qualcomm Snapdragon processor with Krait cores but it was not clear if it was a dual-core or a quad-core processor.

The report also pointed out that the Tizen smartphone, SM-Z9005 may come with specifications similar to the company's 2012 flagship, the Galaxy S III.

Earlier this year, Samsung officially announced that it was integrating its Bada OS development team with that of Tizen, a few months back. Since then, Samsung has reportedly been working on the devices running the new OS.