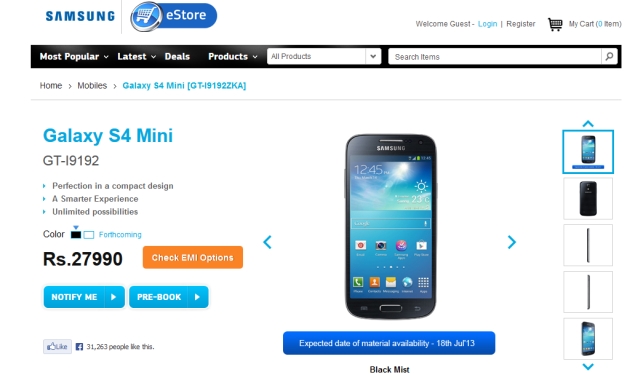 Samsung launched its Galaxy S4 Mini smartphone for Rs. 27,990 in India. However, it is only now that the company has started taking pre-orders for the device. The online store also notes, "Expected date of material availability 18th July." This means the device can be expected to be available only after July 18 and until then people can pre-book the smartphone. Another online retailer has also listed the device, although it comes with a 'coming soon' tag.

Samsung has been rolling out different variants of its flagship smartphone, Galaxy S4 globally for a while now. The device has been launched in India to strengthen the premium mid-range segment of the company.

As far as the specs are concerned, Samsung Galaxy S4 Mini is powered by a 1.7GHz dual-core processor with 1.5GB RAM. The device boasts off a 4.3-inch qHD (540x960 pixels) Super AMOLED display, with a pixel density of 256ppi. It comes with 8GB of internal storage which can be further expanded up to 64GB via a microSD card. It runs the Android 4.2.2 Jelly Bean with the company's TouchWiz skin on top. On camera front, the device features an 8-megapixel rear camera and a 1.9-megapixel HD front facing camera. The device also supports dual SIM (GSM+GSM). The Galaxy S4 mini is backed by a 1,900mAh battery and is available in two colour options - White Frost and Black Mist.