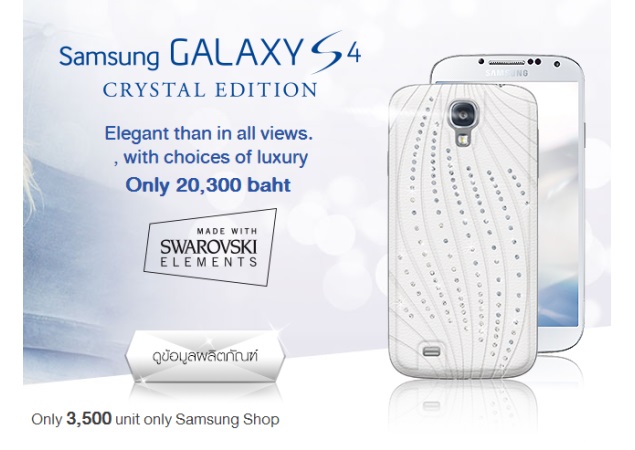 Samsung has been famous for launching its Galaxy smartphones in new avatars, or variants, and following the tradition, the South Korean manufacturer has now announced the Galaxy S4 Crystal Edition.

As of now, the 2013 flagship smartphone variant is only available via Samsung Thailand and has been priced at 20,300 Thai bahts, which translates to roughly Rs. 38,700. Notably, Samsung Thailand's site clearly mentions that the Galaxy S4 Crystal Edition is available in limited numbers i.e. 3,500 units.

Unfortunately, there is no word on the release of the Galaxy S4 Crystal Edition outside Thailand markets. The highlight of the new Galaxy S4 variant is that it features Swarovski crystals studded at the back.

Under the hood we assume that the Galaxy S4 Crystal Edition has similar specifications as the original variant.

The Samsung Galaxy S4 was globally launched in March this year. However, the device landed in India only in April with a price tag of Rs. 41,500.

The device sports a 5-inch full-HD display with a resolution of 1080x1920 pixels, and pixel density of 441ppi. It is powered by 1.6GHz Exynos octa-core processor alongside 2GB of RAM and runs Android 4.2.2 Jelly Bean. The Galaxy S4 sports a 13-megapixels rear shooter and a 2-megapixel one on the front.