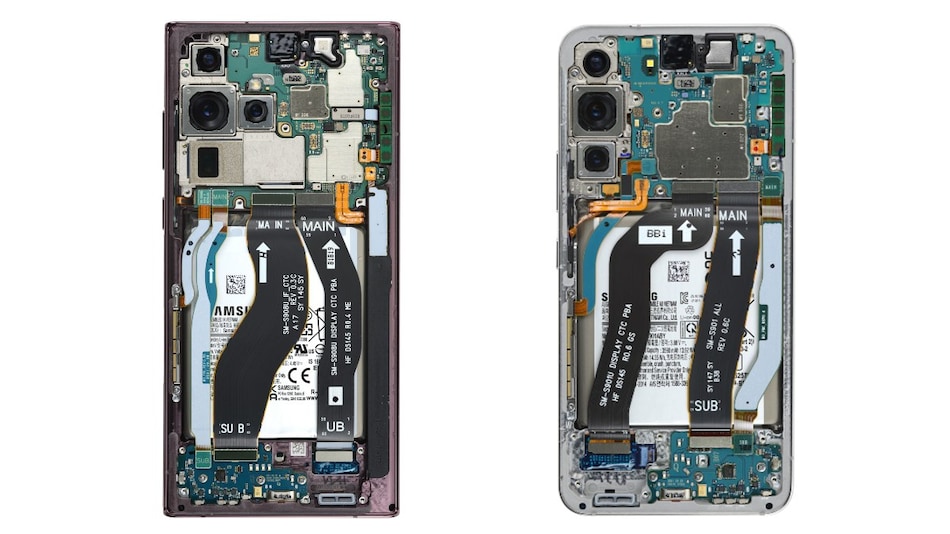 Samsung Galaxy S22 Ultra, and Galaxy S22 get 3 points out 10 on repairability scale

In Samsung Galaxy S22 Ultra and Galaxy S22 smartphones teardown video, iFixit says that disassembling the Galaxy S Line hasn't changed much. It highlights that the only upside of these smartphones are the standard Phillips screws, which lets one remove the components for a quick disassembly.

As per iFixit, the use of a very strong adhesive makes it difficult for battery replacement as well as screen repairs because they require extra energy to pull these things out of the phones' shell. Folks at iFixt say that the phones are also not DIY-friendly because Samsung has not provided a free public service manual for either device (at the time of shoting the video).

A few takeaways from the teardown video include the presence of an extra connector for the S Pen and “an extremely hefty extra camera” on the Galaxy S22 Ultra. The phone gets a 108-megapixel primary sensor with an f/1.8 lens, a 12-megapixel ultra-wide shooter, a 10-megapixel telephoto shooter with 3x optical zoom, and another 10-megapixel telephoto shooter with 10x optical zoom support. Apparently, the vanilla Galaxy S22's triple rear camera setup did not prove to be much hindrance in the disassembly process.