Samsung Galaxy S21 is said to feature a flat display while the Galaxy S21 Ultra may come with a curved display. 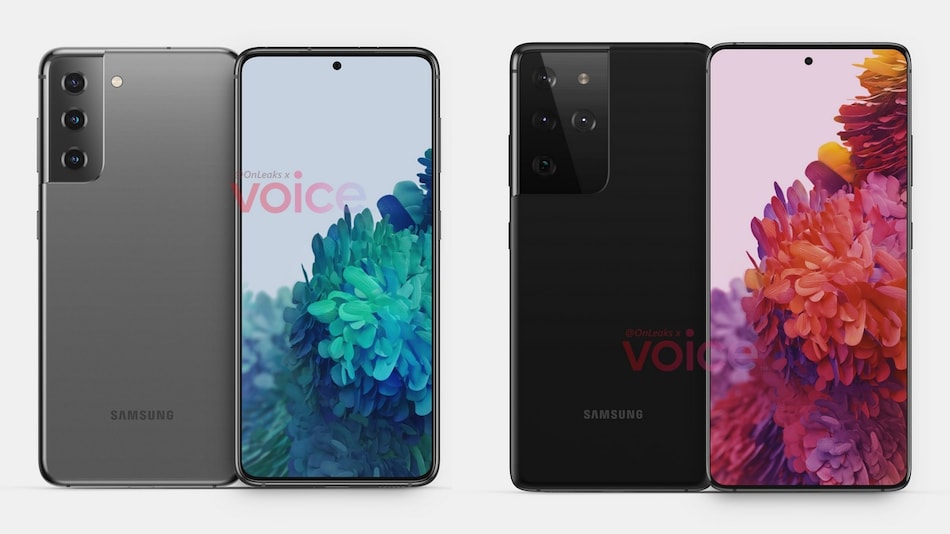 Samsung Galaxy S21 and Galaxy S21 Ultra have been leaked in renders according to reports. The Galaxy S21 series (not official name) has been in the news for some time now, and although Samsung has not confirmed the names for its upcoming flagship line-up, it is believed that there will be a vanilla Galaxy S21, a ‘Plus' model, and an ‘Ultra' model. The leaked renders show a design similar to the Samsung Galaxy S20 with the hole-punch cut out and bezel less display.

The renders for the Samsung Galaxy S21, as reported by Voice in collaboration with OnLeaks, show a design quite similar to the Galaxy S20 series. There is a central hole-punch cut out, slim bezels, and a triple rear camera setup. The rear cameras are vertically placed and the module seems to have a unique design. The flash is placed next to the camera module and not inside, like most other phones. The report states that there is a 6.2-inch flat display on the phone and it measures 151.7x71.2x7.9mm with the camera bump taking the total thickness to 9mm.

Coming to the Samsung Galaxy S21 Ultra, the renders shared by Voice in a separate report show a slightly curved display and the screen is said to measure between 6.7-inch and 6.9-inch. On the back, the phone may come with a large camera module that houses four sensors, as well as the flash. In terms of dimensions, the rumoured Galaxy S21 Ultra measures 165.1x75.6x8.9mm, and the thickness increases to 10.8mm when taking the camera bump into consideration. The phone is said to come with support for the S Pen but there will be no slot within the phone to house the pen.

Samsung has not shared the release date for the Galaxy S21 series or whatever it ends up being called, however, a recent report mentioned that the South Korean giant may unveil the new line-up as early as January next year. The Galaxy S21 series is expected to be offered in Grey, Pink, Silver, Violet, and White colours. The company may also unveil the Galaxy Buds 2 along with the phones.