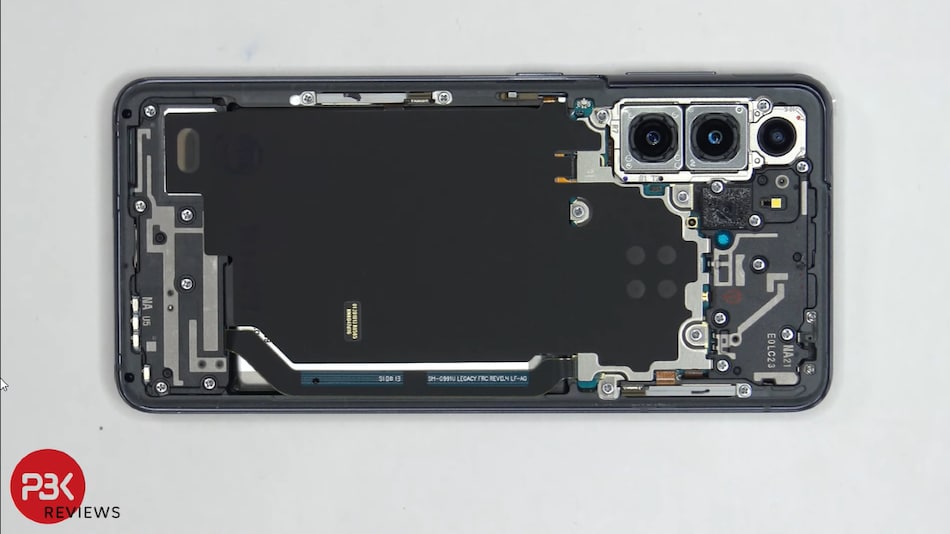 PBKreviews gives a reparability score of 7.5 out of 10 to Samsung Galaxy S21

Samsung Galaxy S21 has undergone a full-blown teardown and the phone's reparability is assessed alongside. The teardown video shows the internals of the new Samsung flagship, detailing all the components the company has crammed into the frame and whether it is difficult to replace the battery or not. The teardown reveals that there are foam balls integrated into the top and bottom speaker modules to amplify the sound output even more. There are rubber protections on the microphone and speaker openings as well. The phone's battery is glued onto the frame with adhesive, and there are no integrated pull-tabs.

YouTuber PBKreviews has published the first Samsung Galaxy S21 teardown video on his channel. The video reveals that the phone has a plastic back panel that needs to be removed using heat and a pry pick. At the top, there's a wireless charging cable that can easily be disconnected. The YouTuber goes on to remove the two 5G mmWave antennas on the sides and shows what the top and bottom speakers look like. The triple rear camera setup has optical image stabilisation (OIS) on the two bottom sensors.

To remove the battery, the YouTuber had to apply some heat from the display side to loosen the adhesive and use pry picks to finally remove it from the display frame. He mentions that pull-tabs were missing on Samsung Galaxy S21 to enable the repair person to apply pressure and ease the removal process of the battery. The video shows that the battery is removed with some difficulty but without causing any damage to any parts on the phone. Once the battery is removed, the fingerprint reader is revealed, and it's seen to be glued to the screen.

Samsung uses a 3D layered graphite material to dissipate heat from the phone, instead of any copper or vapour chambers. The YouTuber says that this does the job “as good as” other methods. PBKreviews gives a reparability score of 7.5 out of 10 to Samsung Galaxy S21. He says that most of the parts are replaceable and the back plate, in particular, is easy to remove.