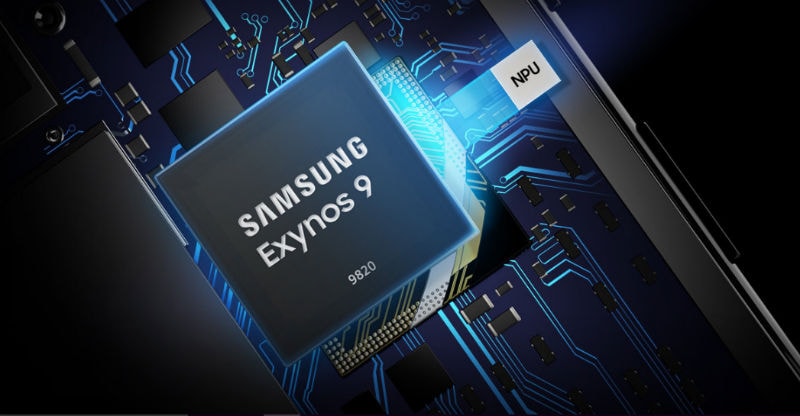 Samsung as expected on Wednesday unveiled the Exynos 9 Series 9820 SoC based on the 8nm LPP (Low Power Plus) FinFET process. This premium SoC is expected be integrated into the Galaxy S10, Galaxy S10+, and Galaxy Note 10 flagships next year. The processor is claimed to reduce power consumption by 10 percent compared to 10nm LPP process, comes with an integrated neural processing unit (NPU), a custom tri-cluster CPU, Mali-G76 MP12 GPU, support for 8K video recording, and an advanced image signal processor (ISP) as well.

The biggest highlight of the Samsung Exynos 9 Series 9820 SoC is the integrated NPU - a component that specialises in processing artificial intelligence tasks. Samsung notes that the NPU allows the processor to perform AI-related functions seven times faster than its predecessor, thereby enhancing AI capabilities of a mobile device. The SoC integrates a 4th generation custom CPU that consists of two custom cores, two ARM Cortex-A75 cores, and four ARM Cortex-A55 cores. This new custom CPU is touted to boost multi-core performance by 15 percent, single core performance by up to 20 percent, and boost power efficiency by up to 40 percent when compared to the Exynos 9810.

The SoC integrates the Mali-G76 MP12 GPU, and because of its wider execution engines, it offers up to 40 percent performance improvement and 35 percent enhancement in power efficiency. The chipset's ISP supports up to five sensors including an IR sensor, 8K video recording 30fps, 4K UHD video recording at 150fps, and uses the physically unclonable function (PUF) for added security.

Furthermore, it supports up to 4K UHD (2160x4096 pixels) and WQUXGA (2400x3840 pixels) displays, UFS 3.0 and UFS 2.1 storage, LPDDR4x memory, up to 22-megapixel rear and front cameras, and if it's a dual camera setup then it supports up to two 16-megapixel lenses. The new Samsung Exynos 9829 SoC is expected to go in mass production by the end of the year - this timeline makes sense if the SoC is going to be used in the Galaxy S10. A recent leak tipped that the Galaxy S10 will debut with a display hole to have space for the selfie camera alongside managing high screen-to-body ratio - this fits with Samsung's Infinity-O display option unveiled at SDC last week. A separate report sees tipster claim that a low-end Galaxy S10 model will come with a price tag of as low as $650 (roughly Rs. 46,900). This could be designed to take on the likes of the OnePlus 6T and Xiaomi Mi 8.