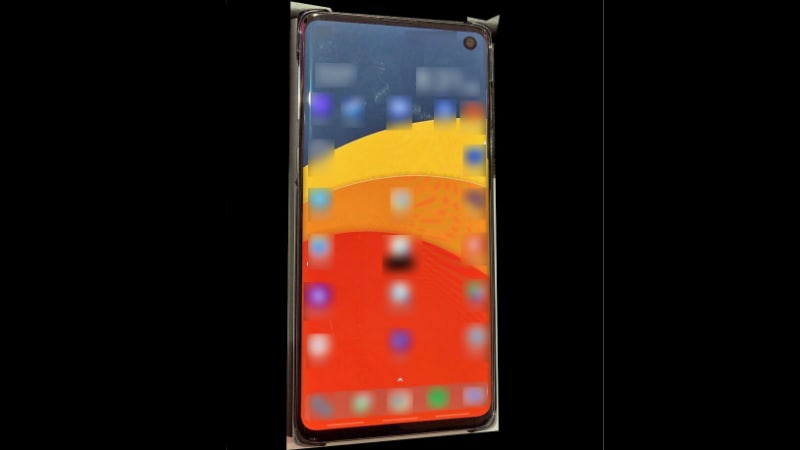 Samsung Galaxy S10 will be released ahead of MWC 2019

Tipster Evan Blass has leaked a photo of the Galaxy S10 in working condition. It shows only the front of the 6.1-inch variant and we can see that the top and bottom portions both have bezels. The bottom portion seemingly has more bezel than the top portion. The device is seen sporting the Infinity-O display design which is a selfie camera hole on the top right edge of the screen. The camera hole has a bezel of its own, with a thick bezel surrounding it as well. Blass also tweets that the phone will have the ability to wirelessly charge other compatible devices like handsets and watches.

Even though the chins are visible, they are definitely much smaller than the predecessor. The Samsung Galaxy S10 panel leak earlier this week shows the difference between the Galaxy S9 and Galaxy S10 bezels.

Another report from Techtastic suggests that the smartphone will release in five variants, and not four. The report states that there will be two 5G variants of the smartphone. The report says that the two 5G variants will be called Samsung Galaxy S10 5G, and Samsung Galaxy S10 Bolt. Both the phones will sport 6.7-inch screens, quad rear cameras, dual front cameras, Qualcomm Snapdragon 855 / Exynos 9820 SoC, ultrasonic in-display fingerprint sensor, and sport a ceramic back panel. The Galaxy S10 Bolt is a model specifically for Verizon users, and it will sport a larger battery than the Galaxy S10 5G device.

The report also states that the Galaxy S10 series will release on February 20. Samsung is expected to unveil the Galaxy S10, Galaxy S10+, and Galaxy S10 Lite at an Unpacked event before MWC 2019 next month. The smartphones will only be available for pre-orders after its launch and will go on sale starting March 8.