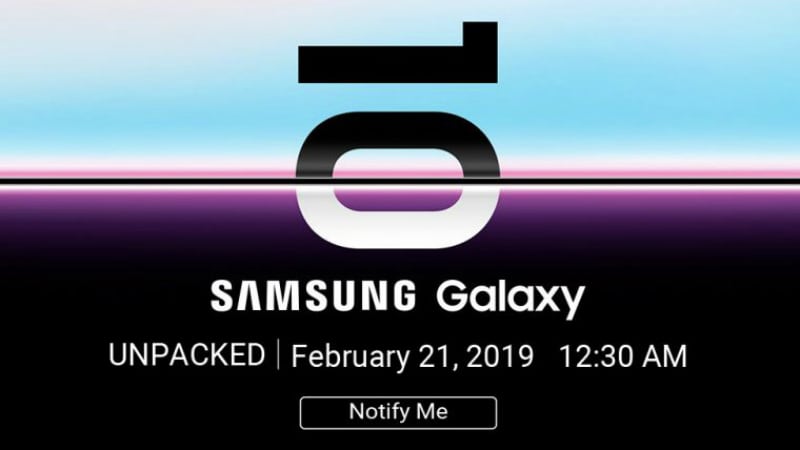 Samsung Galaxy S10 launch has been teased on Flipkart. The online marketplace has featured a banner highlighting the schedule of the Galaxy Unpacked 2019 event as per the Indian Standard Time. There is also the option to get notified about the launch of the Galaxy S10. All this suggests that Samsung could launch the Galaxy S10 family in India just in line with its global rollout. In other development, the South Korean company will reportedly offer the Galaxy Buds for free to customers who pre-order the Galaxy S10 models in Russia - something that may be true in other countries as well.

Flipkart has featured a banner on its mobile app to highlight the India time of the Galaxy Unpacked 2019 event that is taking place in San Francisco, California. The event will begin at 11am PT on February 20 (12:30am IST, February 21).

Notably, the banner available on the Flipkart mobile app showcases the same image that sported on the formal invite last month -- prominently showing the number 10 with the digit 0 split horizontally. Customers can also register with their name, email ID, and phone number to get notified about the global event.

Flipkart's early move suggests that the Samsung Galaxy S10 family will go on sale in India through the online marketplace shortly after its global debut. Some previous reports mentioned that the new range will reach select markets starting March 8, while pre-orders for the new models could begin on February 21. Rumours have claimed that there will be the regular Galaxy S10, Galaxy S10e aka Galaxy S10 Lite, and the Galaxy S10+ that all might arrive in India alongside their global rollout.

Separately, as GalaxyClub reports, Samsung will bring the Galaxy Buds for free to customers pre-ordering the Galaxy S10 models. The Samsung Russia website has reportedly included the code to suggest the pre-order offer, though it is believed to be available in some other markets as well. However, we weren't able to verify the development through the Samsung Russia website.

The Galaxy Buds, which are also rumoured as the Galaxy Ear Buds, are likely to take on Apple's AirPods with a truly wireless audio experience. A recently leaked render even suggested that the Galaxy Buds may have wireless charging support.