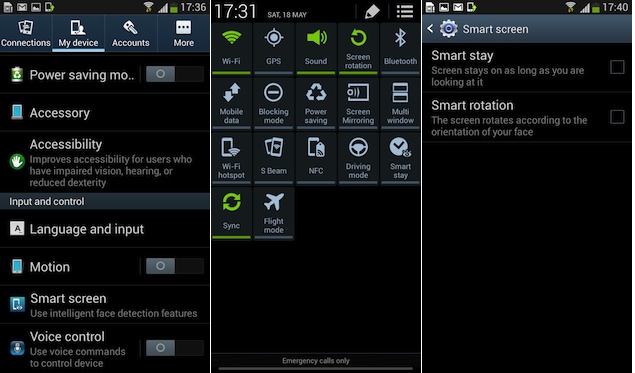 It looks like the Samsung Galaxy S III will soon receive a number of Galaxy S4 software features if a new leak is to be believed.

Samsung focused website SamMobile reports that the company is working on a new firmware I9300XXUFME3 - Android 4.2.2 Jelly Bean for the Galaxy S III which will include a number of new software enhancements including a new Galaxy S4-like lockscreen with support for multiple widgets, an additional 'Light' unlock effect and an improved ripple effect compared to the current version, the ability to change clock size and set a personal message. It will also include the Adapt Display screen mode that optimises display settings depending on ambient light conditions automatically and offers more natural colours.The site informs that Samsung is likely to release the update in June.

The update will also bring the Daydream lock screen mode, a driving mode, actionable notifications, a new notification tray with additional toggles and a Galaxy S4-like tabbed interface for the phone settings menu. The update will also bring a new version of S-Voice, Samsung's voice assistant and add voice controls for operating the phone using voice commands. It will also include full-screen Samsung apps and a new smart switch widget.

It's still not known if the update will also bring the camera features of the Galaxy S4 which include the Cinemagram like Animated photo mode, an Eraser mode to delete moving objects from five consecutive photos, Drama shot that takes multiple photos of a moving object and merges them all to denote action, and Best face that allows selecting the best face shot in group photos.

The site is also offering the test firmware for download but as with other pre-release software, especially those from unofficial sources, flashing it on your phone is at your own risk.

In March, screenshots of a Settings screen that displayed toggles for Smart Stay, Smart Rotation, Smart Pause and Smart Scroll were also leaked and it was revealed that these were part of the leaked firmware for the Galaxy S III which will update the phone to Android 4.2.1 and bring some of Galaxy S4 features to the Galaxy S III. However, going by the screenshot accompanying the new report, the settings only include Smart Stay and Smart Rotation.
Comments