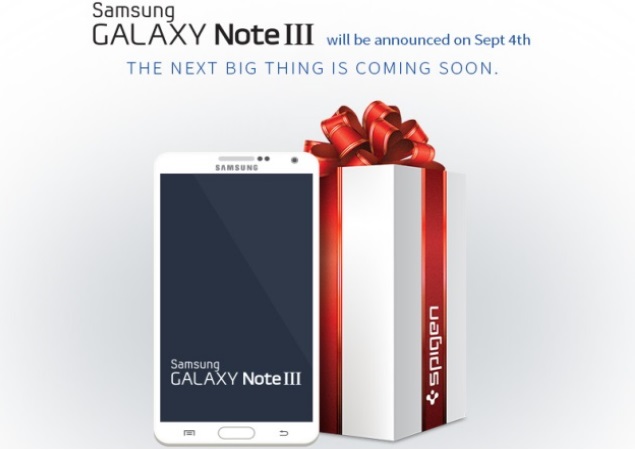 Even though the official unveiling of the Samsung Galaxy Note III is scheduled to take place in a few days, a new purported image of the next Note device has hit the web. The image offers a potential insight into the official launch date and on how the handset might look.

The new render comes courtesy Spigen, a case and accessory manufacturer for various smartphones including Apple's iPhone and Samsung's Galaxy range of smartphones. The image once again confirms the Galaxy Note III's launch date, which has already been revealed by a Samsung official. The image is accompanied by some captions including, "Samsung Galaxy Note III will be announced on September 4" and "The next big thing is coming soon".

Although the new render on the site looks far from the finished unit, but gives an insight into the design workings of the Samsung Galaxy Note III's front panel.

It was also reported that the Galaxy Note III will reportedly go on sale on September 27 in the Taiwanese market, while the device will be up for pre-orders from September 16.

The Samsung Galaxy Note III is rumoured to feature a full-HD Super AMOLED display with a resolution of 1080x1920 pixels. It is likely to be powered by a quad-core Snapdragon 800/ Exynos octa-core processor with 3GB of RAM. The Galaxy Note III will reportedly come with the lowest storage capacity of 32GB. It is rumoured to boast of a 13-megapixel rear camera, a 3,200mAh battery, and run Android 4.3 Jelly Bean.