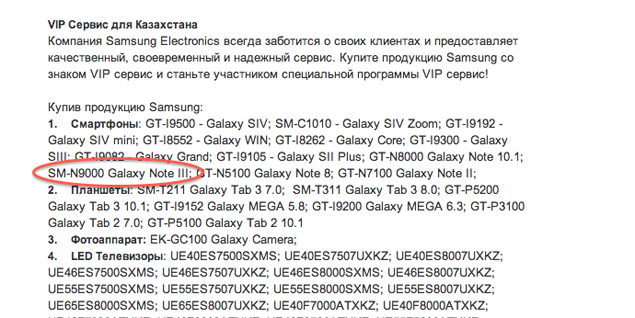 The highly anticipated Samsung Galaxy Note III was recently spotted on the website of Samsung Kazakhstan. The page talked about special VIP services for several Samsung products that included already existing devices such as the Galaxy S4, Galaxy S III, Galaxy Grand and Galaxy S II Plus along with unannounced products such as Galaxy S4 Zoom, Galaxy Tab 3 10.1 and the next iteration of Galaxy Note Phablet.

The page however seems to be updated after these devices were spotted by Techtastic and Galaxy S4 Zoom, Galaxy Tab 3 10.1 and Galaxy Note III are now removed from the listing.

The Galaxy Note III is expected to be launched at the IFA in September. The device is also known to have a 6-inch full-HD AMOLED display and a 13-megapixel rear camera.

The phablet is also rumoured to be powered by a Snapdragon 800 chipset. The chip targets top-end smartphones and has 75 percent more horsepower than Qualcomm's old fastest model, enough to record and playback Ultra HD video as per the company. However, as per Qualcomm's own benchmarks, it doesn't consume more power so battery life is not an issue. The chip also offers built-in support for LTE unlike Samsung's own chipset. So the company won't need additional hardware to enable support for 4G connectivity.