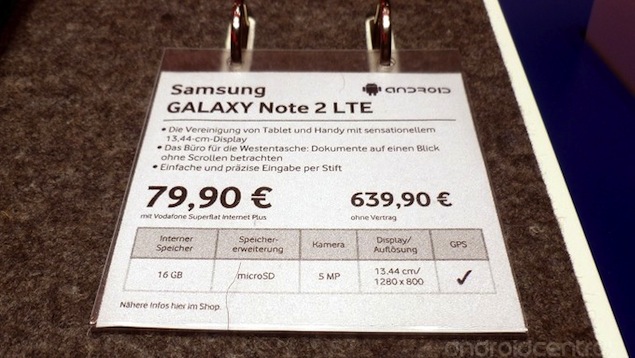 Samsung announced the Galaxy Note II on Wednesday with much fanfare and the upgraded 'phablet' has already generated plenty of excitement. Now, we have the first bit of Samsung Galaxy Note II pricing information.

The 16GB Samsung Galaxy Note II has been spotted at the Vodafone booth at IFA 2012 in Berlin carrying a price-tag of Euro 79.90 with contract. Of more interest to users outside Germany would be the off-contract price of Euro 639.90. That's approximately Rs. 44,750 or USD 805 as per exchange rates at the time of publishing.

Android Central notes that these are prices for "LTE version, but the non-LTE Note 2 seems to be carrying the same price". While direct price comparisons across different markets isn't always accurate, it does offer a ballpark for the expected price in various countries.

Samsung Galaxy Note II is expected to go on sale in markets across the globe starting October.

Now, change TV channels with the blink of an eye!
Micromax announces A57 Ninja 3 for Rs. 4,999