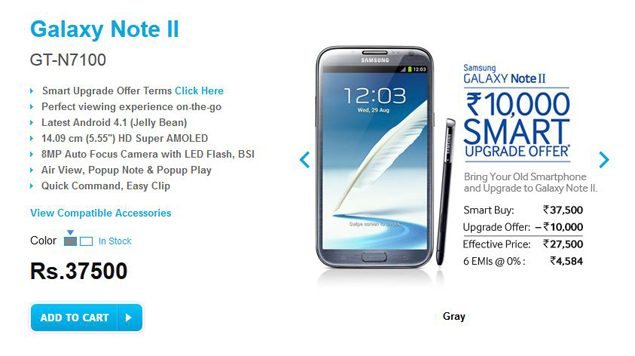 If you wish to exchange your existing smartphone for a Samsung Galaxy Note II, you might just be in luck.

Samsung has introduced a new 'Samsung Galaxy Note II Smart Upgrade Offer' under which customers can get a Rs. 10,000 cash back on the Galaxy Note II in exchange of select smartphones. With the exchange offer, the Rs. 37,500 price tag on the phablet gets reduced to Rs. 27,500.

The offer is valid from 9th to 30th June, 2013. Here is the list of the smartphones eligible for the exchange:

Samsung has laid a few conditions for the offer. The phone that you wish to exchange should be in a working condition, with the LCD and keypad working and intact. Adding to that, the phone should detect a SIM card and show network signal. The battery and charger for the device need to be included. In other words, the device should be fully functional.

The process of availing the offer is as follows. First step is to complete the purchase of a new Galaxy Note II under Smart Upgrade Offer on the Samsung eStore by filling in your old smartphone details. You will get an instant cash back of Rs. 5,000 upon purchase of Galaxy Note II from the eStore and the remaining Rs. 5,000 after the Samsung checks your handset's condition and eligibility for the offer. The amount will be reimbursed in the customer's account upon receipt of the old smartphone.

You will receive the Galaxy Note II with packing material and a buyback form. You need to pack the device liable for exchange, the buyback form and an ID proof. You then schedule a courier pick up within the next 7 days and Samsung will collect it the device with the documents.

Buyback schemes and discounts as well as EMI schemes are flavour of the Indian industry these days, with Apple and Samsung offering many incentives in a bid to seal the deal. Other companies like HTC and BlackBerry have also joined the EMI bandwagon recently.

Samsung is holding a special event in London on June 20 where it is expected to announce new Galaxy and Ativ devices.