Samsung Galaxy Note Edge With Side Display Launched at Rs. 64,900 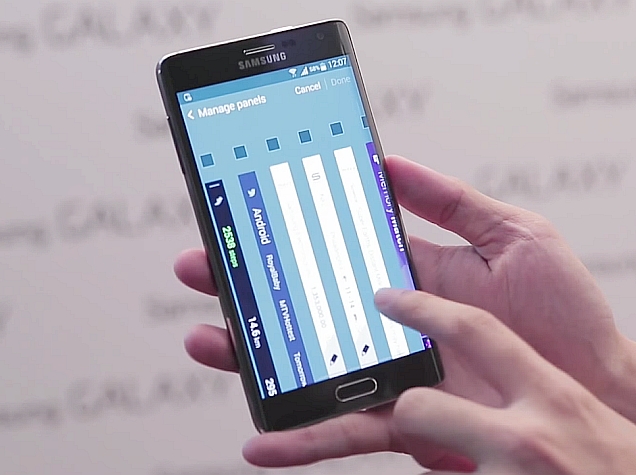 The Samsung Galaxy Note Edge has been launched in India, three months after its global introduction. The handset will be available in the first week of January next year with select retailers at a recommended price tag of Rs. 64,900, and come in Charcoal Black and Frost White colours in India.

Samsung had launched the Galaxy Note Edge during IFA in September and had announced that it will sell the device in select markets only. Later in the month, the South Korean consumer electronics giant had confirmed the smartphone was a 'limited edition concept', and that it would be selling 1 million units of the Galaxy Note Edge across the globe in 2014.

With the side display, the Galaxy Note Edge's camera functions more like a stand-alone, point-and-shoot camera, as the shutter button and other functions appear on top when the phone is held horizontally.

As far as specifications are concerned, the Samsung Galaxy Note Edge features a 5.6-inch Quad-HD+ (1440+160x2560 pixel) Super AMOLED display, and is powered by a quad-core 2.7GHz Snapdragon 805 processor coupled with Adreno 420 GPU and 3GB of RAM.

The rest of the specifications of the Galaxy Note 4 and Note Edge are identical, except that the latter will also come in a 64GB built-in storage variant, and has a slightly smaller 3000mAh battery.

"Samsung continues with its legacy of pioneering extraordinary innovations and setting new benchmarks in the mobile industry. The Galaxy Note Edge is a stunningly beautiful device equipped with a unique curved screen which not only makes the smartphone distinctive but also delivers a unique way to access information and optimizes functionality," stated Asim Warsi, VP, Mobile & IT, Samsung India of the launch.

"At Samsung, we relentlessly pursue customer-centric innovation and develop devices that enable consumers to express their unique style. The Galaxy Note Edge's curved design will make the screen more meaningful to users in their everyday lives," he added.