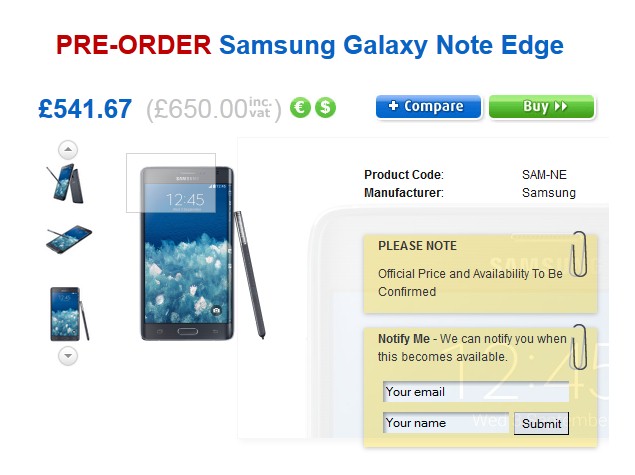 Samsung's recently launched Galaxy Note Edge has gone on pre-order at GBP 650 (approximately Rs. 64,700) in UK via a third-party online retailer, inclusive of VAT. Notably, Samsung has yet to officially reveal the pricing and availability details of the Galaxy Note Edge smartphone.

The without VAT price listed by online retailer Clove for the 32GB Samsung Galaxy Note Edge is GBP 541.67 (approximately Rs. 53,900). The retailer is not offering any word on when the smartphone will ship.

The Edge uses Samsung's flexible-display technology, which came out with much fanfare last year but has seen little use beyond a phone and a fitness device with displays that were slightly curved.

With the Galaxy Note Edge, the Korean electronics company is offering a practical use for the curvature. While the main screen remains flat like previous phones, the right edge extends and curves until it reaches the back. That creates a side display so information such as weather and time can be seen from the side when the phone is laid on a table - such as a nightstand next to the bed.

With the side display, the phone's camera functions more like a stand-alone, point-and-shoot camera, as the shutter button and other functions appear on top when the phone is held horizontally. Developers of other apps will be able to specify how the side display gets used.

The side display also provides one-tap access to various apps normally found on the home screen, as well as to functions such as the flashlight and the stopwatch, akin to what Apple offers in the iPhone's Control Center with a swipe up from the bottom.

The Android 4.4 KitKat-running Galaxy Note Edge handset will be available in 4G LTE and 4G LTE Cat. 6 (LTE Advanced) variants. The handset features a 16-megapixel autofocus rear camera with Smart OIS, and a 3.7-megapixel front-facing camera with a f/1.9 lens.

Xiaomi and Flipkart Crack Down on Mi 3, Redmi 1S Reselling in India
Xolo Q2100 With Fingerprint Scanner to Launch at Rs. 13,499