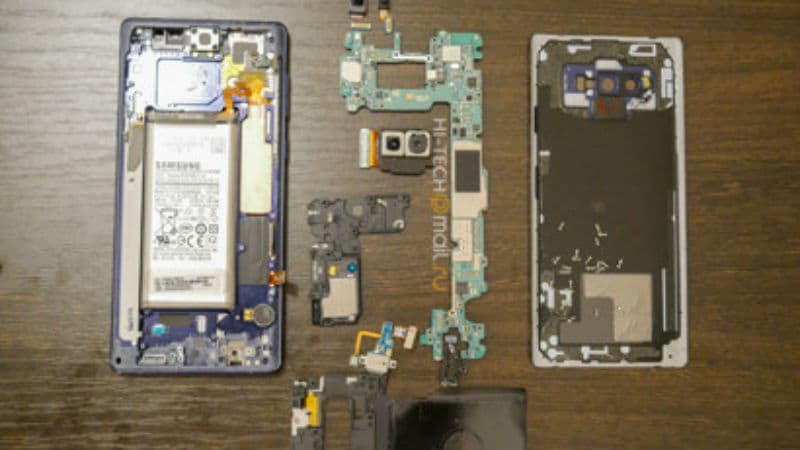 Folks at Hi-Tech@mail.ru published the teardown showing off the inner workings of the Samsung Galaxy Note 9. In the Galaxy Note 9, Samsung has packed a bigger battery than the previous edition. However, it has the same cell density, meaning it takes up more space in the smartphone now. But Samsung has apparently managed to keep the size of the smartphone unchanged from Galaxy Note 8 by shrinking components that also ensures more ease-of-repair. For instance, the charging component now has fewer elements, making it easier to separate from the logic daughter board. Samsung has also made connectors less flimsy and more resilient, which eventually leads to more durability.

While tearing down the Galaxy Note 9, the report follows similar steps to that of the Samsung Note 8. There is a water sealing that ensures liquids cannot enter the smartphone and give it an IP68 water resistant rating. The layout of the components in Galaxy Note 9 is similar to that of last year's Galaxy Note 8.

Meanwhile, Samsung's S Pen stylus is more sturdy, the charging port is connected to the motherboard, the earpiece on the new phone is larger, as the report tipped. Like the Galaxy Note 8, the new phablet also comes with IP68 water resistance. The report claims that Samsung was in a hurry when it had unveiled the Galaxy Note 7, but it has introduced everything it wanted in the Galaxy Note 9.

Has Fortnite pulled off an epic move by abandoning Google Play and potentially going exclusive to Samsung Galaxy Note 9? We discussed that on Transition, our weekly gaming podcast, which you can subscribe to via Apple Podcasts or RSS, download the episode, or just hit the play button below.