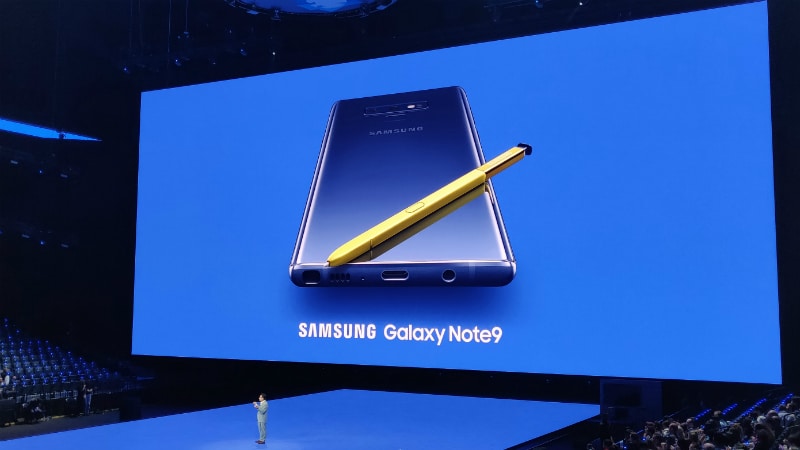 Samsung Galaxy Note 9 launch event has finally begun with Samsung Mobile President DJ Koh taking the stage to bring the latest large-screen smartphone with S Pen support. Samsung says the Galaxy Note 9 smartphone it has ever made and has confirmed it will sport a 6.4-inch display, which was rumoured for long. The fingerprint scanner has been moved to under the camera so that it is easier to reach. It will come in four colours - Midnight Black, Metallic Copper, Ocean Blue, Lavender Purple. Samsung says Galaxy Note 9 will also have a day-long battery life, with the battery capacity the highest ever for the Note series. It will come in two storage variants - 128GB internal storage for the base variant and 512GB built-in storage for the higher-end version, with support for 512GB microSD card. The smartphone will support download speeds of up to 1.2Gbps. As rumoured, Samsung Galaxy Note 9 release date is August 24.

Samsung Galaxy Note 9 camera offers improved lowlight imaging and super slo-mo model. The S Pen will let users take photos with the press of a button, making it easier for users to capture images without a timer or accessories. It also uses Bluetooth LE for added functionalities, like playing/ pausing YouTube videos. The S Pen SDK will be made available soon for developers to create more uses for the stylus; the device takes a minute to charge fully and delivers a charge of 30 minutes - the standard S Pen functions will work even without any charge. The popular mobile game Fortnite will come to Android as a beta later this week, but Samsung Galaxy users will get to sign up starting today.

Samsung Senior Director of Marketing Elina Vives also unveiled the company's Galaxy Watch, the first smartwatch from the brand without Gear moniker. It comes in two sizes, multiple straps, and over 60,000 watch faces. Additionally, it has military-grade durability and can be used standalone without the Galaxy Note 9 owning to LTE connectivity. It can run for "several days" on a single charge. It can monitor users' heart rates for a personal baseline, and can be set to recognise up to 39 workout exercises. The new Samsung Wireless Charger Duo can charge the new Note 9 and Galaxy Watch at the same time.

Bixby is also getting upgraded with Galaxy Note 9, and will be more "conversational and useful." The demo showed it is able to under context and remembers conversations to deliver results for user queries. The Samsung AI will work with a number of new services, such as Google Maps, Yelp, and Uber, among others. Bixby will also power the Galaxy Home, Samsung's competitor against the likes of Amazon Echo, Google Home, and Apple HomePod. Natural sound processing and deep bass are at the centre of the new smart speakers, which will also integrate the company's Smart Things Hub. It has 8 microphones for far-field voice recognition and can direct the sound towards the user upon hearing their voice, much like the HomePod. The new device will have Spotify integration and let users playing on their phone to the Galaxy Home with the press of a button. Spotify will be available on Samsung TVs, phones, and speakers and will be part of the setup for these devices.

The Galaxy Note 9 live stream will let fans all over the world watch the event online. Just tap the play button in the YouTube video embedded below to watch the event. We will be at the event too, so you can refresh this page every few minutes to get the latest updates without skipping a beat.