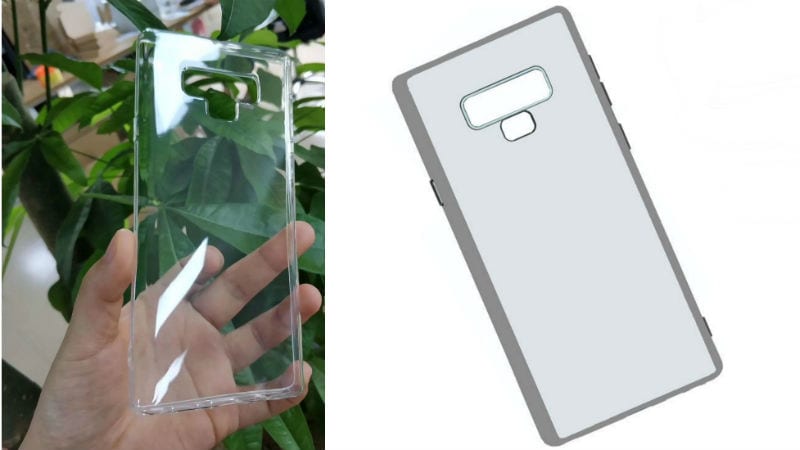 Following the launch of Galaxy S9 and Galaxy S9+, the next flagship smartphone from Samsung - Galaxy Note 9 - has become the major point of speculation in the last few weeks. There have been several leaks and rumours before, and Galaxy Note fans are expecting some new features in the handset. One of the major changes in terms of design is expected to be a repositioned fingerprint scanner. Last week, design leaks of the Galaxy Note 9 had suggested the smartphone will not be much different than the Galaxy Note 8, save the fingerprint reader. Meanwhile, freshly leaked images of the screen protective case of the upcoming handset reaffirm a different position of the fingerprint scanner.

The new leak, coming from popular anonymous tipster Ice Universe, who took to Twitter to post the new images, claims that the Samsung Galaxy Note 9 will sport a horizontally-mounted fingerprint scanner on the back. The upcoming phablet will possibly have the horizontal camera module with the fingerprint sensor. It might come across as good news for most fans since the ergonomics in the previous variant were not praised by many. Interestingly, Samsung does not seem to have changed the size of the horizontal camera despite changing the position of the fingerprint scanner.

Coming to the other features spotted in the leak, there is a mysterious-looking space for a button near the bottom left edge of the Galaxy Note 9. Four other grooves seen in the protector case could be the Bixby shortcut, volume keys, and a power button. It is expected that Samsung may introduce a dedicated camera shutter key, but there is no information on its exact functionality. Notably, it is positioned way below the power button. We will have more information when Samsung officially announced the smartphone.

Apart from the displaced fingerprint sensor and the additional button, the leaked image of the Galaxy Note 9 case hints at quite a similar design to its predecessor, something that we have seen in leaked render images of the smartphone previously.

As for rumours and leaks in the past, the Galaxy Note 9 is expected to launch on August 9, and sport a 6.4-inch Super AMOLED Infinity Display with an 18.5:9 aspect ratio. Other specifications include a 4000mAh battery, Bixby 2.0, a Qualcomm Snapdragon 845/ Exynos 9810 SoC, and Android 8.1 Oreo with Samsung Experience on top.

Apart from that, an in-display fingerprint sensor might make an appearance on the phablet although rumours also suggest Samsung might settle with a traditional rear-mounted one. The Galaxy Note 9 is said to measure 161.9x76.3x8.8mm that is slightly thicker than the Galaxy Note 8. Pricing and availability details might get clearer closer to launch which is expected sometime around July or August this year.