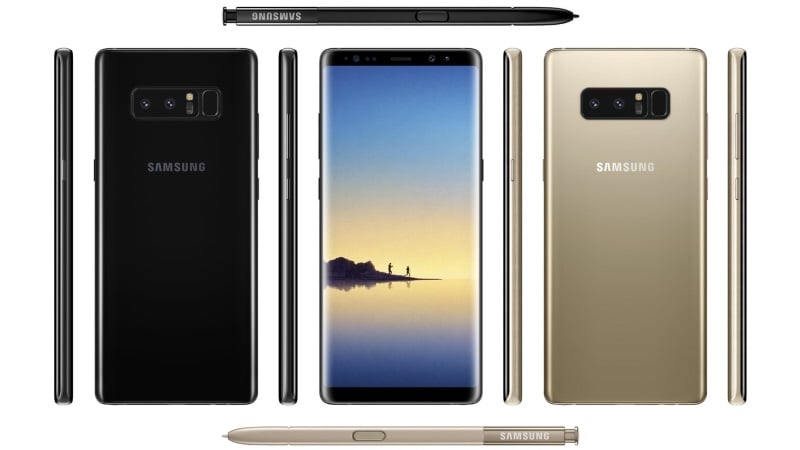 Samsung has already announced that the company will launch the Galaxy Note 8 smartphone on August 23 and several leaked renders have given a fairly good idea about the handset's design. Now, the final specifications that will be offered by the smartphone have also been leaked and suggest that the upcoming Galaxy Note series flagship will pack an impressive 6GB of RAM.

After leaking the renders of Samsung Galaxy Note 8 earlier, Venture Beat's Evan Blass aka @evleaks has now leaked the alleged final specifications of the smartphone. As per the report, Galaxy Note 8 will sport a 6.3-inch QHD (1440x2960 pixels) Infinity Display with an aspect ratio of 18.5:9. It is expected to be powered by Exynos 8895 SoC globally, but use Qualcomm Snapdragon 835 in the US, just like the Samsung Galaxy S8 and Galaxy S8+.

The highlight feature of the Samsung Galaxy Note 8, apart from its S Pen stylus, is expected to be its camera. The Samsung Galaxy Note 8 is expected to come with a dual camera setup with two 12-megapixel sensors. The primary wide-angle lens comes with an f/1.7 aperture and dual-pixel autofocus, while the secondary telephoto lens has an f/2.4 aperture and enables a 2x optical zoom, as per the report. Both the lenses are also said to offer optical image stabilisation as well.

As mentioned earlier, the Samsung Galaxy Note 8 will be packing 6GB of RAM, an improvement over Galaxy S8 models that were launched with 4GB of RAM. The Galaxy Note 8 has been tipped to come with 64GB of built-in storage, which will be further expandable via microSD card. The handset is expected to measure 162.5x74.6x8.5mm. Galaxy Note 8 has been tipped to house a 3300mAh battery that can be charged either wirelessly or through USB Type-C. The handset is expected to come with a a fingerprint scanner at back.

The Samsung Galaxy Note 8 has also been tipped to be offered in Midnight Black and Maple Gold colours initially but is expected to be launched in Orchid Grey and Deep Sea Blue colours later. To recall, Blass recently shared the renders of the smartphone in these colours recently. As per the report, the Galaxy Note 8 will cost around EUR 1,000 (roughly Rs. 75,400) in Europe when it will start to ship in September.