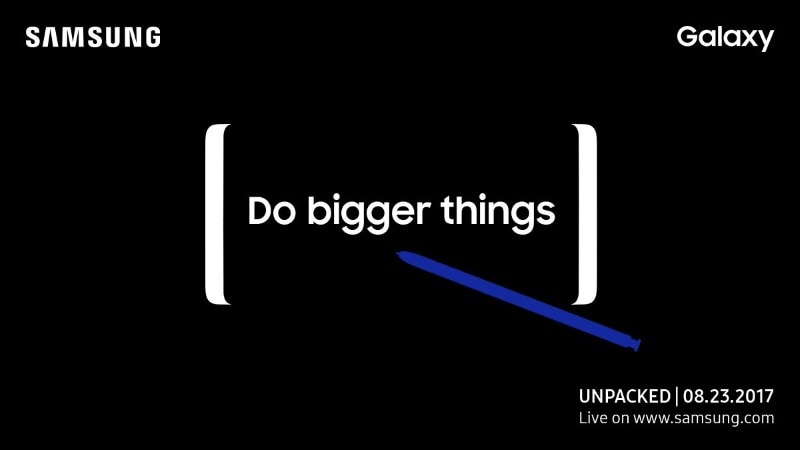 Samsung is all set to launch the next smartphone in its Galaxy Note series of phablets, the Galaxy Note 8. The company has started sending invites for Unpacked launch event on August 23. While an earlier report had pointed to the same date for launch, we now have the official confirmation from the South Korean company. While the company doesn't say much on its launch teaser, it has used the tagline "Do bigger things" to indicate a larger display and more features over current flagships.

In the invite image, shared by Samsung Mobile through a tweet on Thursday, the company has displayed the outline of a smartphone with an Infinity Display, just like the Samsung Galaxy S8 and the Galaxy S8+. Notably, the signature S Pen can also be seen right alongside the outline in the invite image, all but confirming the launch of the Samsung Galaxy Note 8. Samsung said, "Find out what it means to do bigger things on 08.23.2017," in its tweet.

As we mentioned, "bigger things" is likely an indication of more features over current flagships as the Samsung Galaxy Note 8 has been tipped to feature only a slightly bigger 6.3-inch display compared with 6.2-inch on Galaxy S8+.

To recall, the Samsung Galaxy Note 8 is expected to be powered by Snapdragon 835 or Exynos 8895 SoC (depending on the market). The smartphone has been tipped to pack 6GB of RAM. The dual camera setup on the Galaxy Note 8 is expected to come with two 12-megapixel sensors and independent OIS (optical image stabilisation) for each lens. The camera setup on the smartphone have been said to be in a horizontal orientation and the sensors are believed to be separated from the fingerprint sensor by the LED flash and heart rate monitor in the middle. Rumours of an in-screen fingerprint sensor also continue to spread - though of course, it depends on if the company is able to successfully implement it in time for the launch.

As per leaks, the Samsung Galaxy Note 8 has been tipped to house a 3300mAh battery. There have been several leaks about the design of the smartphone and some of the recently leaked cases have even shown similarity. As Samsung had heating and explosion issues with Galaxy Note 7, which recently even made a comeback as Galaxy Note Fan edition in Korea, the company would definitely want to revive the series with a bang (no pun intended).