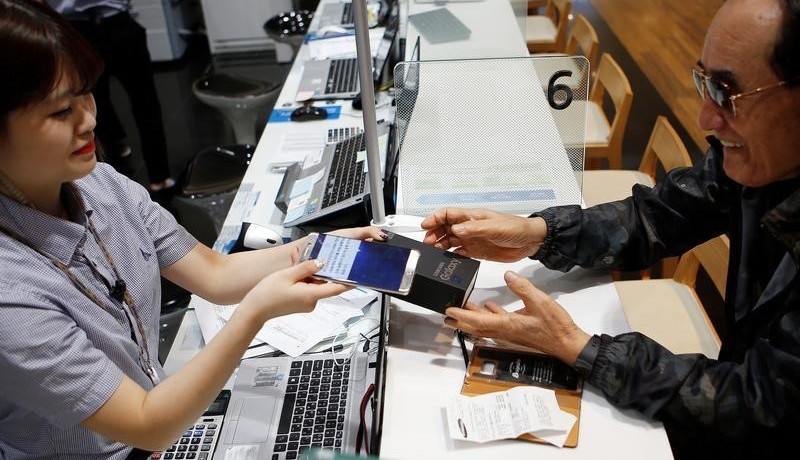 Two days after the company announced it was finally killing off the flagship handset over issues with exploding batteries, owners were given the option of a full refund or an exchange for a different Samsung smartphone.

Those opting to get their money received a KRW 30,000 (US$26) gift card, while anyone choosing to swap for another Samsung handset got an additional KRW 70,000 phone bill credit.

"This is compensation for our customers who experienced a big inconvenience," the company said in a statement.

The debacle triggered a three-day stock rout that shaved 10 percent - around $23 billion (roughly Rs. 1,53,881 crores)- off Samsung's market value. The plunge was only arrested on Thursday when stock closed up 1.4 percent.

A day earlier, Samsung slashed its third quarter profit estimate by one third.

"Potential long-term brand damage ... is a greater threat to its credit profile than the direct financial impact," the ratings company said.

Samsung is so dominant in South Korea - it accounts for around 17 percent of the country's GDP - that the company's woes were cited by the central bank when it trimmed its 2017 growth outlook from 2.9 percent to 2.8 percent.

"Because it makes up such a large portion of our economy, we considered the impact from the disruptions in its production in our forecast," bank governor Lee Ju-Yeol told reporters.

Not all of those who returned their devices on Thursday were happy at the company's decision to halt Galaxy Note 7 production completely.

Lee Jae-Kyung, a 43-year-old office worker, said he had been very satisfied with his Galaxy Note 7 and was only returning it because the model was being discontinued.

"They won't offer any firmware upgrades and warranties from next year so there's no real choice," Lee said.

Shift to Apple
Roh Kwang-Soo, a 31-year-old sales manager at a mobile store - and a Galaxy Note 7 user himself - said he was leaning towards the new iPhone from Samsung's arch-rival Apple.

"I'd been using Samsung's Galaxy Note Edge before I got the new Galaxy Note 7," Roh said. "Now, I think I might use this opportunity to try something new."

Apple launched the iPhone 7 last month and the phones will be available in South Korea from October 21.

Customer defection is one of Samsung's biggest concerns, especially as the Galaxy Note 7 was specifically aimed at taking on the iPhone in the premium handset market.

"I was so excited about the new Galaxy Note 7 and now I'm furious that I had to go through all this," said office worker Park Jong-Won, 33, who was also considering a shift to Apple.

South Koreans returned their phones in person, but in some markets the process was more complicated.

US customers living some distance from an outlet had to struggle with a special Samsung "return kit" that included protective gloves and fireproof packaging.

Samsung said the precautions were required by the US Postal Service.